How old is too old?

I will be honest: when I received my latest issue of New York magazine and this was the cover, I was a little grossed out (for lack of better words.) 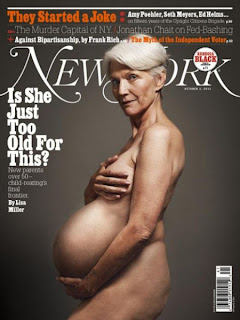 The cover shows a woman in her 50s, obviously pregnant, recreating the infamous Demi Moore Vanity Fair cover from the 90s. At first I thought, this must be fake, right? And then I saw the headline, and thought, this is not right...and dove right into the article (job well done editors or NYmag!)
The article is about the growing trend of women in their late 40s, 50s and 60s becoming new moms, thanks in large part to medical science. This group of featured women all decided late in life, some after establishing themselves as career women, that they wanted to become moms. Because of modern advances in the field of infertility treatments, they all were able to conceive children at a time in their lives when they should be enjoying their grandchildren.
I have been struggling for days now after reading this article, as to how I feel about all this. At first I thought it was madness. Why would these women want to risk getting pregnant so old! There are so many health issues for themselves, let alone all of the risks that they are putting the fetus in. How selfish is this of them?!
Do these women realize the stress that having a baby puts on you physically? Emotionally? Do they realize that they won't be sleeping for the rest of their lives?
How will they run around with their kids and play? How will they be able to walk up and down stairs 100 times a day, and pick their kids up all day long?
Do they realize that when their kid graduates high school they will be in their 70s? And their kids have a higher chance of growing up without parents?
I think about my parents, 59 and 62. They are in better shape than any other person their age. Both of them are athletes, they travel all the time, they are constantly on the go, hanging out with friends...they live the life of riley. When they watch M for a few days, even sometimes a day, they are absolutely exhausted. It takes the energy of both of them to play with her, and run around after her, and care for her during the day. How could a single mom of 65 take care of twin 6 year olds?
And what about the constantly being mistaken for grandparents?
I know a woman, in her early 60s now, who after raising two kids decided she wanted to have more kids when she was 50 years old. She went through 6 rounds of IVF and finally conceived a child who has had many health issues to date. When that child was just a toddler, she went through another 5 rounds of IVF and finally conceived twins. Now she is a hearing-impaired senior citizen raising three young children, who are often mistaken for her 40 year old's kids. This is just insane to me.
But then I look at the other side of this issue.
These women all have a few things in common. They are older and wiser than the average 20 something popping out kids. For the most part (at least the women in this article) they all have very successful careers. They are all well educated. They are also what most would consider wealthy, having worked for 30 years, and not had children to take care of before this.
The article goes on to say that studies have proven that children born to these older women go on to test better than those born to 20 somethings. They say that it is because these older parents pay more attention to their children, and spend more time with their children than the average young mother.
Grandmothers have been raising children for years in our society and no one thinks twice about it. But when grandmother-aged women become biological mothers themselves it is taboo. And rightfully so I think (do I? I keep going back and forth on this issue...) because someone their age isn't biologically meant to have children - it is called Menopause - the end of your child bearing years. But due to advances in science, women can now actually be taken out of menopause and conceive children themselves.
Just because you can have a child, with the help of science, doesn't mean that you should, right?
But them look at me! I cannot conceive naturally due to health issues. Does this mean that I shouldn't be able to have children? Of course not! I am only 32, very healthy and energetic (most days), in my child rearing prime...but who is to say that a woman of 50 isn't just as healthy (probably more than me, in the shape I am now!) and just as able to raise a child as I am, maybe even more?
I would love to hear what other Mamas out there have to say about this growing trend, so comment below.
Posted by Mama J