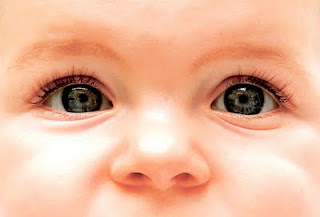 Bfeeding stunk for me...I hated being a mooo-tilda. I don't know if it was the extreme size of my boobs, but it was a battle between baby and I every feeding. She could never get the right latch....and that's all they stress - the right latch, the right latch - and you stress and stress until you've cried more about what a failure you are as a mom, because it's so natural and good for the baby.... If they want you to do it so bad, and it's so great and natural, then why are there millions of lactation consultants out there? At the hospital they're HORRIBLE - they sit above your boobs usually massaging them in front of your husband and then all of a sudden they'll go "there you got it, that's a latch - great....oh you lost it....try it again" and you have NO IDEA what happened that was right, and what changed, cause it all feels awful.

If you do try it - use that lactation crème lasinoe on your nipples...they will bleed and crack. You'll need some sort of pads too - after soaking through a shirt at the mall, I realized it's not for me. Pumping is great - it was easy for me and I had a super duper pump that cost like $600....it was more than hospital grade....the lactation consultant I went to asked me all sorts of questions about it because she had heard, but knew nothing about them. I think I'm the exception, I feel like most people don't like pumping. You just feel tied down like some sort of farm animal. I went everywhere once I stopped b-feeding baby, and I feel like other people around me had a lot less freedom.

Baby is growing just fine - she doesn't have a big belly, but she's a solid kid...and she's had her fair share of being sick, but that can be attributed to daycare.

Major support for bfeeding - because I think it's a good idea to try and see if you like it - I know I'll try it again in the hospital with baby #2, will come from that Isis Maternity class - the girls in my class (9 out of 10 breastfed) all did stuff out all the time....they went to movies, they went out to eat, they went shopping, they would go everywhere and breast feed everywhere. The class was the single greatest thing I did for me and baby, but for someone who needed support for bfeeding....you just learn so much about how acceptable it is, and you get to hear of the places in the greater boston area where people have gone and successfully had a feeding session (i.e. - one girl was furniture shopping and did it in a chair at the store, but it was perfectly acceptable by the people working there). Isis has a great place to bfeed if you're in the copley area, and you can get your parking validated!