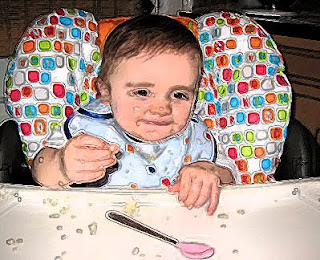 There are very few things in this world that gross me out. Cockroaches, smelly people on the bus, mold. . . oh, and Spit-Up. Even before I had my daughter, spit- up always really skeeved me out. There I would be, playing with a friend’s baby and then – SPLAT – all over me. I would wipe it off and smile and say “oh, don’t worry about it, all babies do it!” knowing the whole time that my baby wouldn’t do it, and wishing I could catapult myself home immediately to change my now rancid smelling shirt.

So imagine my surprise when my lovely daughter popped out and turned out to be a spitter. Now, let’s be clear, we are not talking about the occasional spit up – turns out, it is true that every baby spits. We also are not talking about the kind of baby who spits up after every meal – another very common phenomenon that can be remedied by keeping a few burp cloths on hand (hence, all those pretty, embroidered burp cloths that everyone brings out with them and secretly hopes to never get dirty)

No, my daughter spit up constantly, all day long, whether she had eaten or not, whether she was awake or not, whether she was crying or not. We are talking, ten, fifteen, sometimes twenty times a day. And here is the real bitch of the whole thing – there was nothing wrong with her. Babies like my daughter are known as “happy spitters.” Yes, I am serious. It took a while for me to become a believer too. I cried about it. I took her to the doctor. I made them a GI specialist take a look at her. I even tried putting her on reflux medicine. All to no avail. Turns out her only problem was that her digestive system needed more time to develop and the only medicine for that is time. As her digestion matures, I was told, the spit up would diminish.

OK, so that is all fine and good in theory, but when you are doing one THOUSAND loads of laundry a day while trying to raise your infant, it’s enough to make you lose your mind. I had to change her clothes constantly, and I had to change my clothes constantly, I had to learn to get spit up off the rug, off the couch, off my friend’s clothing. I had to buy millions of burp cloths and millions of bibs. All the cute baby outfits that I had for my newborn daughter were never seen because they were always covered in bibs. And to top it off, I had to constantly “warn” anyone who wanted to hold her that they were in serious danger of being spit up on (isn’t Karma a bitch?).

So for those of you with spitty babies (and even for those of you with the babies who occasionally spit up), I have some advice that only someone who has lived through it can offer. First, get lots of the cheap Gerber cloth diapers that they sell at Babies R Us and use them as burp cloths – they are the most absorbent and you won’t be bummed out about getting the pretty lace embroidery covered in spit-up. Second, find some cute bibs (I really like the Bumpkin’s Organic Cotton – cute and functional at the same time – also available at BBRUS). Third, get lots of cotton shirts for the baby that do NOT snap in the crotch – the last thing you want to have to do when changing a spitty shirt is to have to take off the baby’s pants in order to get the shirt undone. Fourth, go to Target and get yourself a bunch of shirts that you don’t care if they get spit up on. Fifth, always have baby wipes on hand as they are a great way to clean up spit-up when you are in a pinch. Sixth, to get spit-up out of a rug or other furniture mix dish-soap, white vinegar, and the hottest water you can get from the tap – rub the mixture on the spot and then cover the spot with a dry towel – works every time. Seventh, burp your baby often and keep his/her head elevated for about 20 minutes after each meal. Finally, know that it will get better and that eventually your baby will stop spitting up. It took my daughter about six or seven months before she stopped spitting up completely, but it finally did stop. So stay strong and happy burping!!!!!

Email ThisBlogThis!Share to TwitterShare to FacebookShare to Pinterest
Labels: words of wisdom