Breastfeeding Diaries: To Pump, or Formula feed - that is the question! (UPDATED) 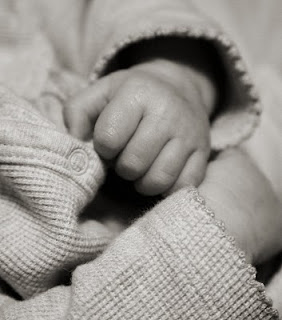 8 weeks ago I shared with you all my breastfeeding story, and told you I would check back in with you in two months for an update...The long and the short of it? It never worked.
For 5 weeks we followed the directions of the lactation consultants, but Marlo and I just never clicked, which in turn got me frustrated and led me to the decision to give up trying and strictly pump milk and bottle feed. I will be the first to admit that I didn't give it 100 percent effort. Since I had to use a nipple shield to get her to latch at all it took me too long to get the shield in place, and try over and over to get a good latch. She would get frustrated that she wasn't fed quickly enough and paw at the shield until it came off. Even if I had her little arms pinned down she would put the shield in her mouth and pull it off. So I began trying less and less frequently until I threw in the towel.
I continue to pump 6-7 times a day, so she is still getting breast milk, but mama is starting to feel like a cow. I call it "going to work" when I pump, because right now my job is to feed this little baby. With all this pumping has come 3 yeast infections (thrush) which thankfully I haven't passed to her as she isn't officially breastfeeding. The APNO I originally claimed to be a lifesaver stopped working for me, and I was put on Nystasin, which is also a topical ointment, but one typically given to the infant with thrush. It seems to clear up in the redness and burning, but I am sure it is just a matter of time before it comes back. And on top of that I now am getting these tiny blisters on my left nipple - righty has been in the clear thus far. Apparently it is skin that is growing over the milk ducts and clogging them. I discovered them after lefty produced about half of what righty did one night. I now have the lovely task of popping them by forcefully squeezing my boob between my hands...I do get some sick satisfaction out of it - like popping a zit.
I am also getting severe pain in my boobs when my milk comes back in after pumping. I was told by my doctor and lactation consultant that this is because I produce such a large quantity of milk (I actually pumped 6 ounces out of each boob the other night). Good times.
Lately though, everyone keeps asking me how long I plan to pump and bottle feed Marlo, which has gotten me thinking about what my options are. Really there is only one - start her on formula. For some reason, with that choice comes a whole slew of guilt. Why should I sacrifice my babies well being for my selfish reasons? I have had to cut broccoli and citrus out of my diet because it was making her uncomfortable when I gave her my milk after eating it myself...is that such a big loss? What are a few hours a day of being uncomfortable if I am doing what is best for my baby?
But then I get selfish and think about the freedom that comes with giving her formula. No more changing tops and bras due to leaky boobs, no more nipple pain, no more of being a slave to the pump and having to wake up in the middle of the night to get relief. I wouldn't have to worry about drinking too much wine or what I was eating...sounds glorious!
But then I think about the cost of formula, and how we have saved so much money the past 8 weeks by feeding her breast milk. Her spit up doesn't smell, and neither do her diapers - and that would all go to shit (ha). And the 5 additional Weight Watchers points for breastfeeding are an added bonus...BLERG!!
How does one make this decision? How did you make the decision as to when to switch your baby to formula? Was anyone else pumping and bottle feeding? I would love to hear your stories/comments below...I need help Mamas!!!
I was given this link to a great article about weaning from pumping, and wanted to share: http://www.exclusivelypumping.com/2010/01/02/weaning-from-the-pump/
Posted by Mama J