When my best friend's son was a few months old, she had to take him to Children's hospital to have him fitted for a head cup bed, due to one side of his head being flatter than the other in the back. I had never even heard of such a thing before this, and had actually gone with her to the doctor's when she found out he needed this apparatus to sleep on top of. We joked about it and said, "at least he doesn't have to wear a helmet! That would be just awful..."

A few days ago I found out that my poor little peanut has to get a helmet...and wear it for 6-8 weeks...for at least 20 hours a day. Her head had been getting flatter and flatter in the back, and as the concerned parent that I am, I called our pediatrician to express my concern about her head shape. They referred me to the Plastics department at Children's Hospital, where we had our evaluation last Thursday.

Within the first few seconds of meeting the doctor (who will remain nameless due to my critique to come) he told me that my daughter's head is misshapen after measuring the dimensions of her head. A normal person has .6-.8 ratio of width to length of head. My daughter's head is wider than it is long, giving her a 1.1 ratio. This is not normal.

So I asked Dr. Fancy Pants, as he will from now on be known, what he suggests and he said "Well, are you happy with the shape of your daughter's head?"

What? What kind of question is that? I told him that I didn't understand what he meant by that - I don't care what my daughter's head is shaped like, as long as it isn't going to inhibit growth or function later on in her life. So Dr. FP says, "Fine, then we don't have to do anything, but your daughter's head will be misshapen." He then went on to tell me that it will look more like "a Chinese person's head" - flatter in the back and wider than my head, he pointed out. I could not believe these words were coming out of his mouth. He basically told me that if I want her head to look like mine, I need to get a helmet on her ASAP.

My little daughter sat there on my lap, so calm and quiet, chewing on her Sophie's foot...and I looked down at her trapazoid shaped head and decided that it would be best for her if we went forward with the helmet. At that point I had tears in my eyes as I kissed the top of her head, thinking about how I won't be able to do that whenever I want after she gets the helmet. My poor baby!

We then proceeded down the hall to get fitted for the helmet, and that is where everything was put into perspective. I was all emotional about my baby having to wear this thing on her head for 6-8 weeks, when sitting next to us in the waiting room were kids with Cerebral Palsy waiting to get fitted for braces for various things, and children with deformities that have to wear braces their entire lives...and I was upset about a stupid helmet!!! It all seemed so trivial as I was watching the moms with their sick children waiting to see the technician. If this is the worst thing that happens to her, then we are even more blessed than I thought... 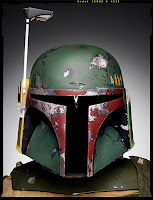 The getting fitted for this thing was the tough part - she had to sit in a Bumbo chair (which she hates to begin with) with her shoulder's exposed as they put this sock thing over her head and waved lasers all around her to take exact measurements of her head. Needless to say she did not like it one bit.

We then had to pick out a color or pattern for the helmet. Should I go Yosemite Sam? Or Tweety? Or bandana print? Or a patriots logo? How about none of those...My husband asked if we could get a Star Wars helmet that looked like Boba Fett's (because that would be cool). We opted for a light pink version that I am going to decorate the crap out of! I hear the bedazzler is on sale at Michael's...Watch out now!
Posted by Mama J

Email ThisBlogThis!Share to TwitterShare to FacebookShare to Pinterest
Labels: Health