My daughter has not been napping the usual 2-3 hours like she used to. She has also refused to nap in her bed for the last week. I think she got used to napping in non-crib locations while we were away from home for a good 10 days straight. So now we are lucky to get 20-30 minute stretches 3 times a day, which means that Mom the Entertainer is working a lot more hours that she is used to! 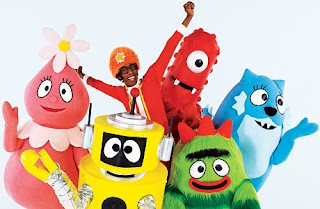 I have exhausted our toy collection...she can only knock over the stacking cups, chew on Taggy the Elephant until he is soaking with saliva, and look at herself in a mirror so many times a day. I have dangled all sorts of objects from rings in front of her until I am blue in the face. She bounced in her bouncy exersaucer until her legs got tired. I put on not one, but two puppet shows today (thank God for my mother and her attempted golf club head cover collection). We went for a long walk. And then went to Costco for another long walk indoors. We tried to ride Ellie, our dog (she puts up with a lot, but wasn't having this). And finally we had dance party. Which consisted of me holding her in my arms while I attempted to conjure up some of my old dance moves. Needless to say, I am mentally exhausted.

And after all of that, she was still ready to party, so I brought her in front of my computer and played an episode of Yo Gabba Gabba that I had downloaded last week for a long plane ride, but had since forgotten about. I had heard the hype, and seen the commercial with that one eyed creature in the car with the sock monkey, but had never been witness to an actual episode. I had no idea what I was in store for.

Whomever created that show was definitely on the dance floor with me and my glow sticks in college. There is no way this show was created by a sober person. I couldn't even get through an entire 30 minute episode. The characters mouths don't move?! There is some dj fellow in a fuzzy hat and kids pajamas?! And who is that child molester-looking fellow with the glasses?! My baby (and I) is not ready for this show.

I know kids love it, but it is way too whacky for me. Maybe it is because I am a muppet-lover, and grew up with Disney animation, that this show didn't sit right for me. I know it isn't made for parents, and is supposed to be whacky, but give me Handy Manny over Yo Gabba Gabba any day.

Of course I still have the "Baby...remember when you were a baby!" song stuck in my head...and my daughter will probably be obsessed with the show later on in life, but right now NO Gabba Gabba for me.
Posted by Mama J