HELP! My baby hates the nursery at the gym!! 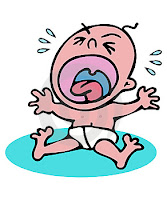 It has been almost 4 weeks since I joined the West Roxbury YMCA. I decided to go there as opposed to the Dedham Health Center because it felt more family-centric there, and it didn't cost me an arm and a leg to join (I am paying $89 for both Marlo and I per month at the Y, when I would have paid $179, plus $350 down at the DHC).

Now the Y isn't the nicest place on earth, it is a YMCA. The nursery room is on the small side, but the toys don't look busted, and it is clean, and I got a good feeling from Josette, the woman who has apparently worked there for 25 years, but still speaks with a broken English accent and still calls my baby girl "he" every day.

Day 1 I sign us in and bring Baby M up to the room. I am asked if she can sit on her own or will she fall over. I say that she can sit, but there is a small chance she will fall over - my mistake. Now they won't put her on the ground to play because I said she MIGHT fall over. I hand her over to Josette and she shoos me out of the room and tells me to hurry and go. Baby M is staring at me through the big glass window and immediately her face turns red and she starts to wail.

Let me get one thing out there - I have never left her with a stranger before. I have been away from her many times (including weekends away), but my Mom has always watched her. And my mom is a carbon copy of me (for those of you that know me, you know what I am talking about), so I am basically leaving her with Mom 2.0. I have left her with a friend for a couple hours during the day, and she was totally fine because she knows her Aunties well. This was the first time I left her with a total stranger.

Needless to say, I was called up to the Nursery in 15 minutes.

The next day I worked out longer, because I didn't realize I was supposed to ease her into being up there and got scolded when I came up exactly one hour and 4 minutes after dropping her off. How do I know this exact time? Josette told me as she handed screaming Baby M to me.

Day 3 she lasted 30 minutes, and the following day Josette came to talk to me in the gym - but she told me that Baby M was doing great! Work out as long as you like!! What a freaking relief.

So this went on for 2 weeks...cut to us both getting terribly sick the third week, and not going to the gym at all. Now this past Monday we returned, and apparently Baby M got it in her mind that we were never going back to that place and totally regressed. She has only lasted 25 minutes each of the four days we have been this week.

I have tried putting her in the high chair there and putting her own toys in front of her. Giving them snacks to give her. Allowing them to give her bottles. Bringing chew toys for her...nothing is working. I put her on the floor, in the swing, in the chair. Got her playing with other babies, but as soon as I leave, the tears start to flow. I have even tried going at different times in the morning: before her second feeding, after her second feeding, without a nap, after a nap, etc.

What am I doing wrong?? How do I get her to get used to being away from me? I need your help Mamas and Papas!!!
Posted by Mama J