We stared at each other from across the dinner table.  For the past 20 minutes my daughter had been switching emotions at a speed that in an adult would probably be the hallmarks of some sort of bipolar disorder, but that I have learned are quite normal behavior for a 2 year old.  “Hannah,” I said, “if you want a cookie you have to finish your dinner.” 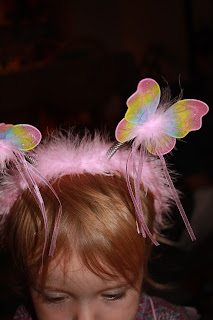 We’ve never really been desert people, which is probably why we’ve gotten this far without ever encountering this standoff before. Don’t get me wrong, my husband and I both like sweets, but not in a way that we crave them enough to have them on hand. If they’re there, we enjoy them. But we generally don’t have them around. So it’s not from any tooth-saving philosophy that my daughter has had limited exposure to them. She’s had ice cream on the Cape, and oatmeal cookies, and I’ve had a stash of organic lollypops on hand to keep her occupied in the cart as I dash through the supermarket. But they’ve never been a part of our daily dinner routine.

This past week though, Grandma came to visit. And one of their activities was baking cookies together. Sugar cookies. With orange icing (for Halloween). So now we’ve found ourselves with a Tupperware bin full of these (admittedly, awesome) cookies long after Grandma’s departure.  We’ve been having them after dinner the past several nights and with the exception of one meltdown early on when we had to explain that one cookie was enough we haven’t had any problems. Until tonight.
We had pasta for dinner; something I can say without hesitation is her favorite food.  She’s been known to ask for it for breakfast. But tonight she ate about two pieces of bowtie pasta, put down her fork, raised her hands triumphantly above her head and exclaimed, “all done!” and then “I want cookie.”


“Say, ‘cookie, please” said my husband and then “you have to finish your dinner first.” Without any hesitation she launched into a full-on wail, mouth wide open, eyes squinted shut, but without tears – the hallmark sign of the cringe-inducing ‘I want it now’ whiny phase that she has just entered.

Thus began the broken record portion of our negotiation, where I (unreasonably) tried to reason with her:
“Cookie,” she sobbed, still tearless, “cookie! Cookie!”
“Hannah,” I said, “do you want a cookie?”
The sobbing abruptly stops, “yeah.”
“Then you need to finish your dinner.”
Hysterics again.
And repeat.

Eventually we modified our tactics and reduced her giant pile of noodles to six and placed the cookie in question at the center of the table. “If you eat these, you can have that cookie.” “Nooooooooooooo!”
This was just the latest battle in a string of power struggles where she has been constantly testing if no really does mean no, and she’s armed with what might be the most annoying sounds known to man along with the added element of surprise. You never know what might transform my sweet little girl with a voice like Elmo into foot stomping monster with a loud voice that is both low and high pitched at the same time and has the unmistakable tenor of WHINE. As much as I just want the noise to stop, and to go back to whatever fun we were having 2.5 seconds ago, I grit my teeth and know I cannot give in.

The whining and pseudo-crying continued at the dinner table for about 10 minutes when suddenly she switched it off and stared off into space. I could practically see the little wheels turning in her brain. She pulled off the head band she had on – a pink fluffy one with two butterflies attached at the end of bouncing springs – and said “mommy, look! Fufferflies!”

I couldn’t help but laugh as she giggled and wiggled the headband to make the butterflies bounce on the end of their springs.  Suddenly she pointed, “Mommy, look! A cookie!” as if she had just noticed it’s presence. “Yes,” I said, “and if you eat that pasta you can have it.”

“Ok!” in went 3 pieces of pasta, followed shortly by 3 more.  “All done!” she said again and held out her hand for her cookie.  As she happily munched away on it I brought some dishes into the kitchen.

“Mommy” I heard, and went back to the table to see what she wanted.  She stared at me, and with the cookie still rolling around in her mouth she said “more cookie?”
Posted by Mama J