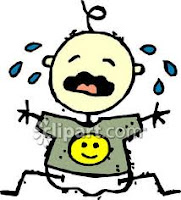 So I have now become "that mom," who's kid is screaming in line.  The one who people are straight up staring at, or glancing sympathetically towards, before quickly averting their eyes.  Sam was having some major teething lately (at least that's my current excuse).  Six teeth coming in at once, four of which were molars.  Most of them are now through, so the residual drop-of-a-hat temper tantrums I think are just a behavior which he learned got a quick reaction and is trying out.  When we knew he was in pain and crying, we were quick to cuddle and console him, and get him whatever we thought he wanted.  Now, if he doesn't get what he wants, immediately, he resorts to whining, crying (usually a kind of fake cry), and then tries to throw a scream in here or there.  It has become a battle of wills, and he is only 16 months.  When he hits the terrible twos I am going to have to have some good strategies.

At home, I can manage and usually diffuse, or if not, wait out the tantrum.  When we are out in public I have stopped giving into him, and held onto him until he stops.  Generally people ignore him, but I have gotten the occasional evil eye and comment.  The latest place he has pulled this stunt was at the Public Library.  He was walking around and it was time to get in line.  There were literally 11 people in front of us in line, and there was no way at the rate it was moving that I could keep him entertained in my arms for the amount of time it would take for it to be our turn.  I let him wander around as long as I could see him and reach him by just stepping out of line.  That worked for about five minutes (except that me stepping out of line apparently forgoes my place in line).  Then he decided to run.  I caught him to great screams, brought him back to our spot, and he calmed down.  The he decided he wanted to get down.  I explained it was almost our turn (clearly not true).  I could sense him building up for a tantrum, so I put him down and held his hand.  He was not pleased.  He broke away and ran.  I retrieved him.  Since we were now next in line, I held him as he squirmed and yelled, while the librarian and several patrons glared at me.  Looks I can take.

Earlier in the weekend he did the same routine at Target.  I think it's something about shiny floors and wide open spaces that make him think of open road.  I ended up also having to hold him and wait it out as he struggled and screamed.  After about a minute the  woman in front of me turned to her partner and said loudly, "you're going to have to check out.  I just can't deal with this," and stalked off.  Fine with me.  I don't really want to deal with a screaming toddler either.  While customers whispered to each other and stared.

Which brings me to whether I am doing the right thing?  Do I leave the store/venue with him when he acts that way?  Is that giving in?  I don't want him to learn he can scream his way out of the situation.  I am approaching it like sleep training (which we never actually did).  Won't he gradually learn that he has to wait in line patiently?

I gaze longingly at the content peers of Sam's who sit in shopping carts, playing happily or looking around.  Sam is only in the cart for long enough to finish a snack, then he asks continuously to get "down" or throws a fit.  I am hoping this is all a phase, because errands are not easy right now.  Maybe I am being as willful as he is, but I think of my students when I am teaching, and think about how I change their behavior.  It's learning process and if I am temporarily, "that mother," I'll live.
Posted by B