As we don't have Oprah's Favorite Things to look forward to anymore (how will I know what crazy expensive cashmere sweater to not buy, and be insanely jealous of the audience receiving for free this year??) I figured I would start writing a recurring post featuring some of my and M's favorite things. I have gone on somewhat of a spending spree in the last few months in the toy department (and furniture, and shoes...) so I figured I would share with you some of our latest acquisitions. These are great for your kids, as well as gift ideas for friends: 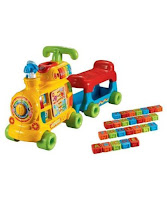 1. V-Tech Sit & Stand Alphabet Train: While visiting some friends in New York, M got to try this baby out...and we had to pry it from her hands when we left. So, in true Mama J fashion, I decided we needed to have it, and have it ASAP. As soon as we got in the car I fired up the Amazon App on the iPad and purchased - it arrived the next day. And we have played with it every day since. M spends a good amount of time each day playing with this, and it is amazing how fast she was able to start recognizing letters, as well as the pictures on the other side of the blocks. She loves to ride it around the house, as well as walk behind it when I detach the seat portion. Great learning tool, you can walk and ride it, it teaches you colors and numbers, in addition to letters...I love it, she loves it...your kid will love it too! 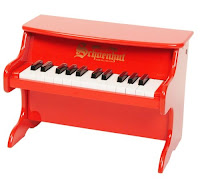 2. Shoenhut My First Piano: I have wanted one of these since the day I found out I was pregnant. Who doesn't like small replicas of big things! I got this off Zulily.com a few weeks ago, but it was more for me than it was for her if I am being totally honest. M does like to spend some time every day on her "PEE-ano" basically just banging on the keys and laughing hysterically. She does love when I play her favorite songs, but gets annoyed when I spend too much time playing it and ignoring her..."Mama all done piano now!" I think I just need to get myself a piano in the future as the two octaves of keys isn't cutting it. I think it is a great gift for a two year olds birthday though! 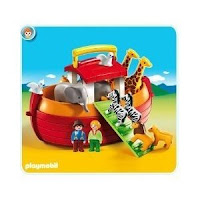 3. Playmobil Take Me Along Ark: This is going down as the best gift from Grandma to date. My mom purchased this at a tiny toy store in Rhode Island because she wanted something we could take out to dinners with M to keep her entertained. We don't go out to dinner without it! The pieces are all made so that they are big enough so as not to be swallowed, and you can even take them in the bath with you (although you will have to dry them out afterwards as some retain water for a bit). We log a ton of time with the "Noah & Gladys' Ahhk." Why Gladys? Well Noah's wife's name is never mentioned in the bible, so I named her Gladys. She looks like a Gladys. :)

4. Playmobil Family House: Another Grandma gift. This is not portable like the Ark, but M can't get enough of it. I love that she is at the age where she can start moving things around and making sounds and acting out a mother daughter relationship with the toys (well, makes them "give kisses"). 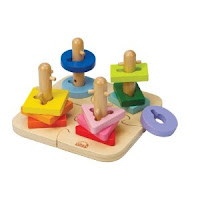 5. Educo Creative Peg Puzzle: This was totally an impulse purchase at a fancy toy store. I felt like I was being talked into it by the saleswoman, and thought I would end up giving it as a gift, but it turns out that M actually really likes it. I was surprised how quickly she was able to understand how it works, but she got it after a few tries and loves to sit and take the pieces off and put them back on. Plus it is a visually a pretty toy, so I keep it out on display. I find a lot of kids are drawn to it when they come over for play dates, so I think it would make a fabulous birthday gift!