Walking in the woods with a preschooler

Turns out, it's hilarious. 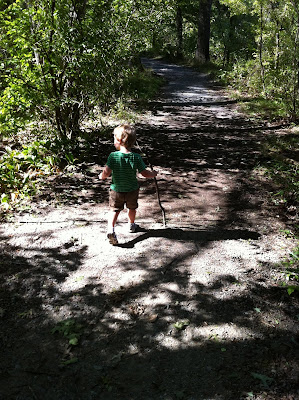 Hey, there's another leaf! And that's a rock! And a tree! And a big tree!

First, we had to find the perfect walking stick. Thanks to Hurricane Irene there were plenty of candidates, but my preschooler, N, considered only those two feet larger than he was.

Mama R: I think that's too big for you
N: Why?
R: Because I don't want to get hit in the face when you pick it up

Perhaps this was not the best choice of words. He spent the next 10 minutes selecting other sticks and loudly asking "will you get hit in the face with this one, mommy?" while I pretended not to know him.

He was also interested in the wildlife available in the Boston metro area...

R: Maybe we'll see some animals in the woods
N: Maybe an Elephant!
R: Probably not an elephant
N: A Rhinoceros!
R: Maybe a squirrel.

N is super curious and has not yet developed his mama's squeamishness about bugs. We came upon a tree stump with a few holes in it...

N: What's in there? (Puts his face RIGHT UP INTO the hole)
R: Spiderwebs, looks like
N: (Yells) HELLO SPIDER!!! HELLO IN THERE!!!
N: (To me) I was telling the spider to come out onto his web
R: Oh
N: (back to yelling into the tree) HELLO IN THERE!!

Preschoolers know how to enjoy the outdoors to its fullest. N dropped his walking stick and sprinted whenever we approached a little footbridge. He smiled and greeted the other walkers we met on the path. He sought the muddiest patches and lectured me about how he was making footprints in the mud. He carefully selected rocks and carried them and then at seemingly arbitrary points he left them on the path.

N: I am leaving them for the birds
R: Honey, birds don't eat rocks
N: Yes, birds do eat rocks. They eat them so they don't get a stomachache.
R: (Thinking about how birds do have gizzards and do actually eat rocks but probably don't eat the marble-sized rocks he just left and is there any way he could possibly know that some birds really do eat rocks or does he just think everything he leaves is food for birds because I tell him they will eat the cracker he dropped in the parking lot?) um... ok.

I was a bit concerned about the time and the baby I was carrying in the Ergo so I wanted to be sure we didn't get lost.

N: Let's go over there
R: No, honey, remember I said we are going to stay on the main path today
N: So I don't get lost?
R: Right
N: Is that the main path over there?
R: No, this is the main path where we are now.
N: Will that over there grow up into a main path?
R: ....

I wish I could remember all of the things he said over the course of our walk - he had me cracking up the entire time. He told me he could hear a train, and when I said there wasn't a train there he rolled his eyes and told me he was pretending. We approached a woman and her dog and he exclaimed "there's another doggie I want to pet!!" I got a few steps ahead of him and turned to see him pick up two rocks, bang them together like cymbals and start singing the good morning song.

The biggest challenge was to keep moving along the path, as he had so many important tasks to attend to. Putting gravel in a tiny hole in a log. Considering a leaf. Watching the water flowing under a bridge. It is so satisfying to see him totally embrace the outdoors the way that he does.

Also, it is good to know that if I ever need someone to mediate between me and a spider, N will be happy to get his face right in the mix.
Posted by Rachel