This past weekend M turned 2. Holy crap I am the mother of a two year old.

No more are we counting her age in months, she is just simply 2.

She is no longer a toddler, but a little kid.

To celebrate the completion of her second year of life we had a little Mickey Mouse Clubhouse shindig with close friends and family. As with her first birthday, she was a little under the weather. Luckily this year it was more of a runny nose than the violent vomiting the year before. We decided to press on, as it was nothing a little Nose Frida-ing couldn't help!

My husband's brother, and my sister-in-law, along with their twin two year olds came to stay with us for the entire weekend. I was nervous about how Marlo would react to having two additional kids actually staying with us in the house, but once they got here, and got settled, and started playing together it was just wonderful.

The twins turned 2 in August, and are very different from my little monkey. They run around the house and climb on things like they were born to do it, while M is still a little shaky on her feet when it comes to stairs and climbing things. But M talks a blue streak and the twins say a few words here and there. But none of that matters when they are playing together. It warmed my heart to see them sharing toys so well (well, M was not nearly as good at sharing as her cousins were), and running and laughing and being silly together. When they left on Sunday, and the house was quiet again, I was definitely a little sad.

I had said I wasn't going to buy her much, but M was showered with gifts from my husband and I, as well as all her friends and family. She opened so many presents over a 4 day period that I think she thought every day from now on she would get a present.

Some of the biggest hits were Minnie's Birthday Boutique, Sesame Street Bus, and Mickey's Choo Choo Express. While she hasn't shown terrible interest in it just yet (my kid has the shortest attention span ever - like her mother!) my favorite thing she got was Toobers & Zots foamstruction set. Any kid that loves to build and sculpt will definitely love this set of bendy foam pieces. 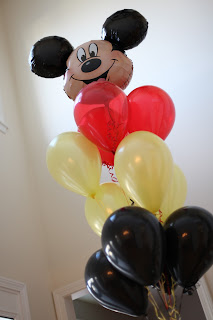 And finally my mother bought her Let's Rock Elmo, the it toy of the season. It was last Tuesday (five days before her actual birthday) that I was cleaning up in the kitchen and heard "Elmo Dancing Mama! Look! Elmo Dancing! La la la la Elmo's song!" from the next room. I peak around the corner to the tree and there is my munchkin with a half un-wrapped present in front of her as she dances around it with her hands in the air. I couldn't be mad (hell, I put the presents under the tree a week early) and it was the cutest thing to see her get so excited about the actual gift. Since we have opened it, she has played with it twice. It is cute, and annoying. If you buy the microphone for the kids separately it actually recognizes Grover's voice and sings along, which in itself is pretty cool. But as with most toys like this, he only sings 6 songs, and they get old fast. It was a big hit with all the other kids at the party though!

All in all it has been an exhausting and wonderful past couple days (shout out to my fabulous mother for coming up to help out with everything! Couldn't have done it without you,) and I still can't believe my baby is 2. I feel like it was just yesterday that my water broke, 4 weeks and 2 days early, while I was out walking my dog and bent over to pick up her poop. And now she is running around the house singing songs at the top of her lungs, and filling our days with excitement and drama...so much drama.
Posted by Mama J