Bullying Encounter and Some Cracker Jack To Go! 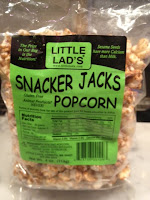 Now that we are deep into the Indian winter and with nowhere to go, we finally joined the Children's Museum. I took my son, I'll call him G, last week to check out the Creative Play Space area for kids three and under. As we parked our Uppababy in the stroller lot I immediately felt warm and fuzzy when I saw the huge play area with a train station, a kitchen station, a whole climbing maze and just plenty of space where my fifteen-month old could go crazy with little worry that something could go terribly wrong. First we checked out one of the side areas where they had magnet day. It was fun and educational as long as no one flung one of the metal objects meant for magnetism across the room. Five minutes later my son spotted the train area and I followed behind him. There were a few kids playing and my son enjoyed one lonely train that he pushed back and forth on his little plot of track where he parked himself. I sat happily on one of benches and watched. A child who seemed to be three if not older approached G and abruptly took the train away from him. G had never quite experienced this before from a bigger kid (and my kid is pretty big for his age) so he started to pout and tears filled his little brown eyes. I went over and nicely asked the bigger boy to share and he reluctantly gave me the train back. I looked around for a parent or a nanny or anyone of authority for this boy and nothing. Weird. A few minutes later the boy came back and this time tried to shove G out of the way. To this Latina mama's delight, my little dude held on tightly to his space, looked at the boy straight in the eye and uttered a loud and scruffy "mmm," serious baby talk for "no." I beamed proudly at my son but I was still worried that the boy would come back for more bullying. So he did and this time with more aggression. I immediately went over and sat next to G to protect him from being shoved. Even with me there, the boy still tried pushing G and I looked around yet again for anyone watching this child. Nothing. After a while the boy gave up and G continued to play.

I have to say that I was a bit disturbed with the whole situation. This is the first time we had experienced anything like this and I imagine there will be many more. But what really bothers me is that the bigger boy may be growing up to be a bully and there is no one to teach him differently, now, when it matters. What if he grows up to be one of those kids who bullies a weaker child to the breaking point? Bad for everyone. We've all read horror stories. All week I have thought about how important it is to teach my child early on to share and not shove and not pick on the little ones or anyone else. It's a matter of raising a child with the awareness that he or she is not the center of the universe (except for mine) and that respect and compassion are both part of sharing.

Anyway, I was originally going to post a yummy recipe but then this incident happened and I had to rant about it. But I can't leave without first telling you about a great treat I had that very same day after the bullying drama. I am glad I had it in the car because I munched on it all the way home and it calmed my nerves: Snacker Jacks Popcorn by Little Lad's. It is my go to Cracker Jack but without all the bad stuff and only the good stuff. It contains sesame tahini, molasses and non GMO popcorn. And yes, sesame seeds have more calcium than milk, or so the label claims. I don't do dairy so this sounds gospel to me.

You can find Snacker Jacks at Whole Foods in the chips section. They really should called it cracker crack cause it's addictive!

Stay tuned for some mostly vegan, always vegetarian and gluten-free recipes that I will post soon. Tabatha, aka, the foodini at Kitchen To Nirvana.