These are a couple of egg crafts that H and I have done recently as we get closer to Easter. H is (still) obsessed with dinosaurs, so that's what we used for these projects but you could easily put little chicks or bunnies or candy into these eggs!
I apologize for the quality of all the pictures - my camera battery was dead so these were all taken with my phone! 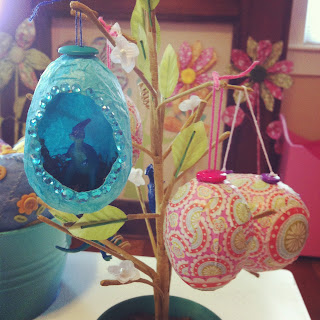 But instead of putting in a little string to open the egg and reveal a prize, we took our inspiration from those sugar window eggs (I have no idea what those are really called! Here's a picture for reference). We cut out a hole, glued some moss onto the inside and tucked in a mini dinosaur. It still needed a little something, so we stuck some little jewel stickers around the opening. Then we strung some embroidery floss through a mini button, glued it to the top, and hung it onto a little Easter tree we found in the bargain section of Target. 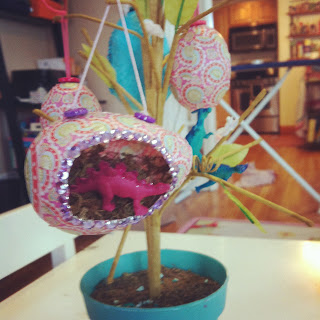 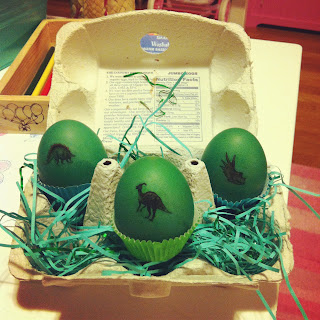 Of course instead of using chicks or candy on the inside we used more mini dinos. I also added a little temporary tattoo of whichever dinosaur was going inside the egg. And even though H made these with me - and watched me put each dinosaur inside - she still was delighted to crack them open and "discover" the little dino on the inside. And she still asking me when we are going to make more! 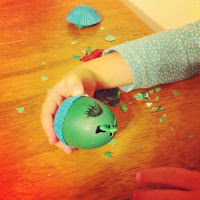 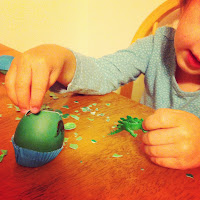 I'm hoping to put togther another post before the end of the week with suggestions for little crafts or non-candy items to put in your child's Easter basket. Stay tuned!
Posted by Mama S

Email ThisBlogThis!Share to TwitterShare to FacebookShare to Pinterest
Labels: Crafts, easter, get crafty