If you are like me, you pin things on Pinterest daily, and never do anything with them. From the looks of my Pinterest boards, my life is pretty amazing - I am building a $5m shingle-style mansion that was interior decorated by India Hicks, I am baking and cooking 3 course meals every day, I am sewing my kids clothes, I am throwing lavish birthday parties, I am keeping my kids occupied by incredible home-made crafts, and I am dressing myself in the latest fashions. All of that is false.

Since I was about to host a house party that would have 7 kids running around my house, I thought now would be the perfect time to put one of my "pins" to the test. To my "Toddler Craft" board I went, and decided on the following two projects: a water color and glue creation, and an experiment with baking soda and colored vinegar (here are the original pins).

Both we experimented with before the party to see if they were even worth doing with the kids. The baking soda experiment was an instant success. It took M a few tries to actually get the hang of using the dropper (at first she would just squeeze it real hard and all the liquid would come out at once, instead of just drops like you are supposed to do) but once she figured it out, she was hooked. This was also a big success at the party (for some kids). I set up three little stations of baking soda in tupperware containers and had 8 different cups of colored vinegar (using food coloring) and the kids loved watching the colored drops bubble and fizz when they hit the baking soda.

The watercolor craft is still a work in progress. I didn't end up using it at the party, but we have done it twice at home. The idea is that you cover the canvas with water colors, then drip clear glue on it, and sprinkle with kosher salt. After two attempts, it still doesn't look anything like the original pin - the salt isn't doing much but just look like spilled salt, and the glue just looks like a mistake. Here are our last two attempts: 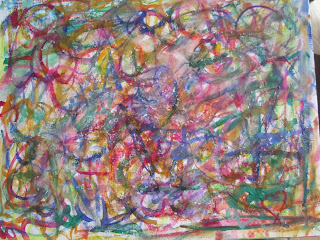 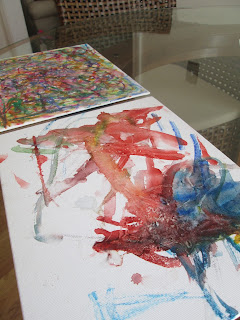 Still nothing great, but M enjoys using the watercolors a ton. So, out of the two crafts we tried, I would totally recommend the baking soda one to keep your kids occupied for long periods of time. Also, you can buy a gigantic container of baking soda at Costco for $5...so it is a fairly cheap craft!

Email ThisBlogThis!Share to TwitterShare to FacebookShare to Pinterest
Labels: Crafts, get crafty