So this isn't the best photo of the deliciousness I made last night, but it was late and my camera needed to be charged, so this is the best I could do with my phone. 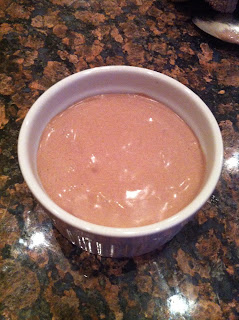 I have had this can of full-fat coconut milk in my fridge for a couple weeks and decided to put it to good use and try and make some whipped dessert goodness last night. I used an immersion blender and whipped it up the entire can of milk until it was pretty thick (next time I will whip it in actual mixer to make it a little stiffer). I then added a little less than 1/4 cup of unsweetened organic cocoa powder and blended it a little longer. While it was tasty, it wasn't very sweet so I went ahead and added in one packet of Truvia. This made it so much better!

It placed it in a tupperware container and popped it in the freezer for 15 minutes and it firmed up to almost a frozen yogurt consistency.

And it was delicious! And M enjoyed it immensely. We called it "healthy chocolate pudding."

I think it would work perfectly on top of berries for dessert.

So simple! Try it out.
Posted by Mama J