A Travel Nightmare (and some travel advice)

I am a firm believer that when you put something out in the universe, it will come back to bite you in the ass...hard. For instance, the second you tell someone your kid is sleeping through the night, your kid will start waking up at least once every night. As soon as you brag to your friends about how well behaved your child is, and how you never experienced the terrible twos, your kid will turn on you the second you walk through the door and throw the fit of the century when you try to get them into their pajamas...every night for a month straight.

In this case, my story has nothing to do with the behavior of my children, but something else I put out in the universe entirely. My younger brother is crazy smart - like computer genius type smart - but this kid is the most forgetful, absent minded person sometimes. I remember when we were little my mom used to have to pin notes for the teacher to his chest because he never remembered to give them to the teacher if my mother put them in his bag. She pinned an envelope to the poor kids chest!! Today he is 33 years old, and every time he travels back to the US (he now lives in Europe) something goes wrong with his travel situation...he misses a flight, he thinks he is on a different flight and goes to the wrong terminal, and once he even went to the wrong airport (La Guardia when he was supposed to be at JFK). I didn't know how this type of thing happened to a grown adult so often. I actually told one of my friends last month about my brother and his luck with travel, and said something along the lines of "I have taken hundreds of flights in my life and not once have I ever missed a flight."

And the universe heard me...and came prepared to bite me. 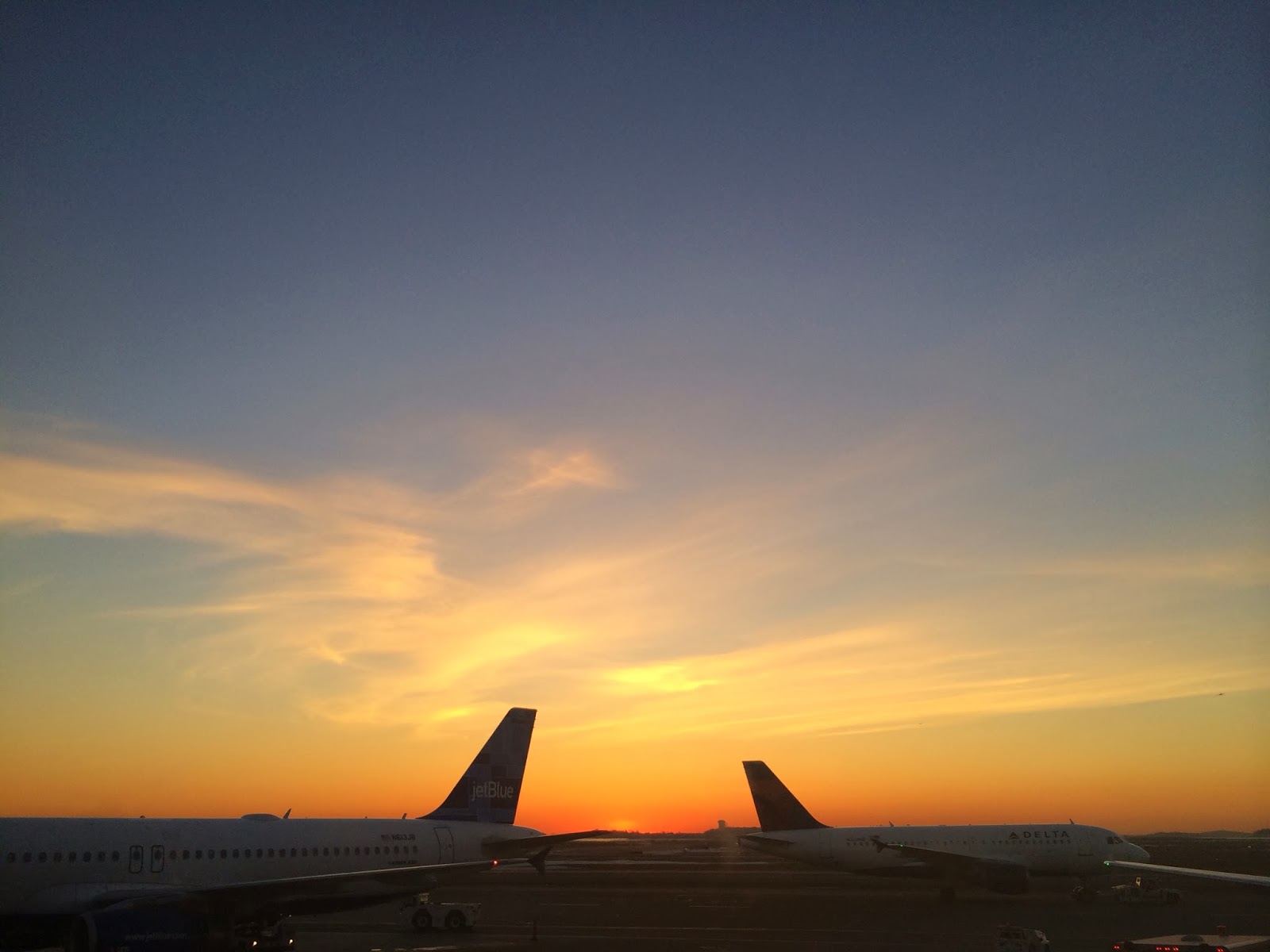 Last Saturday the girls and I were booked on a 6 AM flight out of Boston to West Palm Beach. We were traveling down to see my parents, as Hubs is crazy busy at work lately and we needed some love from the grandparents. That morning we awoke at 4 AM, and we pulled out of the garage (Hubs drove us) at 4:30, as scheduled. We arrived at the airport as planned at 5 AM - plenty of time to get on a 6 AM flight right? Here is where I miscalculated - I didn't account for the time that it would take us to park the car, take the car seats out of the car and put them in their carrying cases, and get us plus the luggage (with Hubs helping) down to the baggage drop off area. It was 20 minutes that I didn't think about.

We got in line to drop off our bags at 5:20 on the nose - the line was long, but consistently moving. I figured it would take us 10 minutes to get up to the front, and then we had Even More Speed so we got to skip the security line. We would be fine. When I think about it now, I want to go back and slap myself in the face. Was my brain not working? How would we be fine??

We got to the front of the line and were told that we missed our flight. There was no way that our luggage would make it to the plane in time and we had to get on another flight. The a-hole that told me this then asked me why I didn't come forward when they called out the passengers on our flight from the long line. I told him that we never heard him and would of course have come forward!

Cue the waterworks. I was sleep deprived, I was already nervous about flying by myself  with the girls, and then this crap happens. It is totally my fault. I am not one to get to an airport late, or with just enough time to walk on the plane. I like to get there early. I thought an hour before my flight would be fine - but now that I think about it, and it would have been if it was just me flying and I didn't have any luggage to check! I have no idea what I was thinking...

So some nice lady booked us on another flight, but we had to go to Fort Lauderdale, which is about 45 minutes south of West Palm. Whatever - we would be getting in about 2 hours later than scheduled, that is fine. The woman was nice enough to give Hubs a gate pass so that he could help us to the gate. I stopped crying and pulled myself together...

In the end, they fixed the bathrooms on the original flight, and we left about 2 hours later than scheduled, which was 4.5 hours later than our 6 AM flight. It was a nightmare of a situation, and could have been avoided if I had actually used my brain and gotten up 30 minutes earlier.

For all of the chaos the girls were incredibly well behaved. There is nothing like being stressed about traveling with your kids alone and having multiple strangers come up to you and compliment you on how well behaved your children are. Sure there was some whining here and there (they had been up since 4 AM!) but I was shocked at how well they took all the delays - more time to run around the terminal giggling..and of course to watch their iPads!

Speaking of which, I know I have given advice about traveling with kids before, but here are some pointers I wanted to share again:

- Ziploc bag everything. I had the following in individual ziploc bags: diapers and wipes, toys and books, snacks, 2 Camelback water containers, 2 changes of clothes. This way it is so easy to keep everything nice and organized and makes going through security so much easier!

- Use your baby carrier. I had Val in the Ergo and since we were flying so early and I knew M would be cranky I brought the umbrella stroller. If M wasn't riding I put our carryon in the stroller and pushed it around. Val won't sit still in a stroller, so I kept her in the Ergo when we were on the move so I had my hands free

- Bring at least one change of clothes for each kid. We always have spills on the plane - most of the time they are my fault - but someone always ends up with wet pants or a dirty shirt.

- People are usually very nice to you when you are traveling with young kids - especially when they are well behaved. Take advantage of those nice grandparents sitting behind you and let them play peekaboo with your kid for a few minutes. Say yes to the flight attendant when she asks to hold your child so that you can pee on your own. Let that security guard help you fold your stroller. You don't have to do everything yourself (although I like to try)!

- Make sure your kids pee right before you board the plane. Even if they say they don't have to go, make them "squeeze out the pee pee" as we say. If they don't they will for sure have to go when they aren't able to go (during ascending and descending).

- Bring lollipops. We are at the age where M is starting to feel the pressure in her ears during take off and landing now. Lollipops seem to help with the pressure, and are a good distraction.

- Let your kids use electronics. I am a firm believer in my kids using iPads. Ok, that doesn't even make sense - ha. What I mean is, if it keeps them quiet, and takes some stress off you, let them look at the iPad on a plane! Sure I bring other things, like crayons and paper, and books, but most of the flight both my kids had an iPad in front of them, and they were content and quiet. I am sure some people were judging me (as they do when I have the iPad out at restaurants) but I don't care! Judge away, and enjoy the quiet flight!

Despite the chaos of the morning, we got to Florida, had an amazing time with my parents in the warm 80 degree sun. And I got to the airport an hour and a half early for our return flight!
Posted by Mama J