The Loss of a Legend 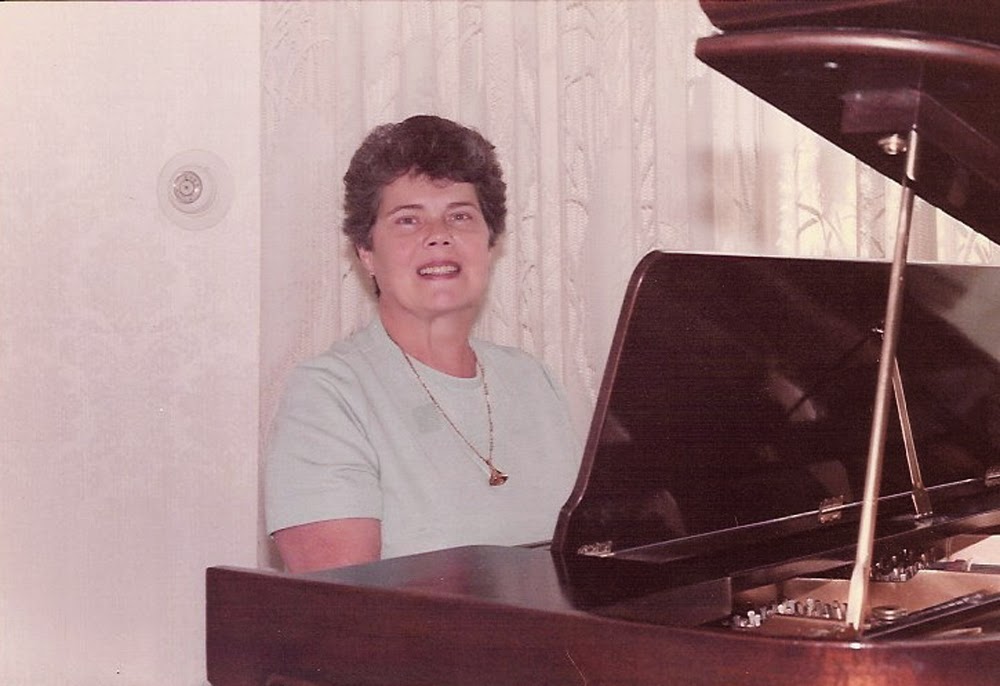 My grandmother, who was known the world over as "Ming," was an incredible woman. She was a no bullshit kind of woman. She wasn't afraid to tell you that you looked a hot mess - but said it with all the love in her heart. She never wore pants - I am serious - I only saw her in pants twice in my entire life. She was always dressed to the nines, and accessorized with scarves and pins to match.

She was a truly gifted pianist. Most of my memories of her from my childhood are of her behind our grand piano. She would spend hours tickling the ivories and singing along to her favorite big band tunes. She could play any song she heard on the piano. I once played a pop song for her on my boom box and seconds later she was playing it on the piano so I could sing along...one of her many talents that I wished I possessed.

She was ridiculously smart. When not at the piano she could always be found with a crossword puzzle or a book in her hands.

She loved her "programs." I have vivid memories of me running down the driveway to the house as fast as I could so that I could watch General Hospital with Ming on the TV in our kitchen.

She loved her Chinese food and her Swiss Mocha coffee (not together of course).

Whenever we would go swimming, Ming would only get in the pool if the temperature was "heavenly." What is "heavenly" you ask? Pretty much bath water.

I can see her now in the pool - getting her exercise by moving her arms around in the water and humming her favorite tunes.

Ming was a second mother to me growing up. She lived with my family for a good part of my life, helping to raise my brother and I while my mother traveled with my dad for work now and then. My mother tells me stories about me clinging to Ming's leg when she got home and not wanting to go to my mother...which breaks my heart as a mother myself, but is a true testament to how important Ming was in my life growing up.

My friends from childhood knew her as Ming, and my college friends were lucky enough to have met her on vacations home to Florida. Here is a prime example of who Ming was...

In the early 2000s I went back to Florida for a vacation with a group of my college girlfriends. Ming was living with my family in Florida at the time. We decided to play some boardgames one night, so of course Ming wanted to play along...I believe we were playing Loaded Questions at the time (a fabulous board game night game if anyone is interested). The question was, "If there is a hell on earth where would it be?"

The answer Ming gave "Right here. Right now." And when we all discovered it was Ming who gave this answer we were peeing in our pants laughing - including Ming. I can see her now at the end of the table, with her glass of wine, wiping the tears away from her eyes because she was laughing so hard. And then telling us she might have actually peed in her pants a little. What a dame.

To get to the point of this post, Ming's health started rapidly declining this last month, to the point where any day I was expecting a phone call. I was told about a week ago that it wouldn't be much longer and that I should either call and say my goodbyes or write something for my aunt to read to her. It is probably selfish of me to say this but I couldn't call. I knew she wouldn't be able to communicate back to me, and I don't think I would have been able to contain my emotions...so I decided to write.

I went through about a box of tissues, but I wrote...and wrote. I wrote about memories I had and would never forget. I wrote about the impact she had on my life, about regretting not seeing her more often in these last few years. I wrote about how I was so happy she got to know Hubs and how they are truly kindred spirits. I wrote about how sad it makes me to know that my children will never know the great and magnificent person that she is, and how my heart was breaking knowing that this will be my final words she will hear.

It was insanely difficult, but I got through it, sent the letter to my aunt and minutes later my aunt told me this..."I read your letter to Ming, leaned over and gave her a kiss from you and she said 'aww...'" This was after Ming hadn't spoken in a few days. My heart just melted.

Within six hours she passed away. This may seem silly to say but I know in my heart she was waiting to hear from my brother and I to leave this earth. She had been holding on for days, but I hadn't the strength to write anything to her, and hours after she heard my and my brother's goodbye she departed.

It was gut wrenching to write what I wrote, but it made me realize that I don't do this kind of thing often enough. I don't mean write a final letter to someone who is on their deathbed...I mean pour out my heart to those that I love, or even simply just tell those I love that I love them as often as I should.

I pride myself on being a strong woman. I am a woman who does not crack or crumble easily. I don't cry easily. I am the one who looks for the positive in situations and doesn't get upset until I really have to get upset. You know who I get this quality from? Ming. Sometimes I wish I was more of the mushy emotional type, but I am just not. This doesn't mean I don't have a softer side, it just means that I am kind of a bitch more often than not.

But writing this letter to Ming was an emotional release and has made me realize that I need to tell those I love how I feel about them, rather than keep my composure at all times and try to be that strong woman I know I am. I guess being emotional doesn't mean I can't be a strong woman...

Anyways, Ming will be missed by all that knew her. Wherever her soul is now may she have her crossword in hand, a piano near by and may the pool be "heavenly."