#MamaJSays everyone needs to watch Derek

I haven't written in a few weeks, mainly because I haven't had anything of value to share...until now.

I love all things Ricky Gervais. I've been a huge fan ever since I saw the original Office series when it first came out. I loved Extras. I read his Flanimals books to my kids. I've seen all his movies, his stand-up and listened to every single podcast of his at least 10 times (this includes all five podcast series, the Best of XM Radio and the Guide Tos). I consider listening to the podcasts over and over like watching reruns of Seinfeld - they never get old.

This all may sound funny coming from a 35 year old stay at home mom who lives in the suburbs, but it is true. I love all things Ricky Gervais (even when he hosted the Golden Globes - gasp!).

When I happened upon Ricky (if I may call you Ricky) on the Charlie Rose show talking about his new creation, Derek, I was immediately interested of course.

So, last year, Hubs and I sat down to watch the first episode of season one and were surprised when we realized it wasn't as funny as we thought it was going to be. Not to say it wasn't funny at all, but it was much more serious and sad that we had expected - not a bad thing, just unexpected. We never got around to watching the rest of the first season, until...

Fast forward to two days ago. After reading online that the second series of Derek had come out on Netflix, I figured I should finish watching the first, so I sat down at my computer after the kids went to bed and dove in. Two days, a box of tissues and a bottle of wine later I have finished both seasons of Ricky Gervais' masterpiece, Derek.

I am not even sure where to begin. Everything about this show is perfect. It is the perfect balance of humor and drama. It is beyond perfectly cast (my only gripe is that Karl Pilkington left in the beginning of season 2 - who knew that "round headed twat" could act so well!) It is beautifully shot, beautifully scored and should win every award possible (Ricky was nominated for a Lead Acting Emmy this year - how Kerry Godliman and David Earl were passed over is beyond me).

Ricky plays the title role of Derek, a special man with a heart of gold and abundant love of all earth's fuzzy creatures. He does not judge. He is never negative. He sees the good in every human being, and is able to bring it out for them to see as well. We should all take a page from Derek's illustrated book (on cats.)

Derek works in a nursing home called Broadhill, which is lead by over-worked and under-paid Hannah, brilliantly played by Kerry Godliman. She is the type of woman that your heart aches for, you want to have a drink with and you want to give all your money to because she has dedicated her life to the lives of the elderly people living in the home. She is a mother figure (although younger in age) to Derek, and loved by everyone she works with and takes care of. She is passionate and kind, but not afraid to hit someone over the head with a rolling pin (well deserved of course).

If you thought Jim from the American version of the Office was the master of the "looking into the camera" face, wait until you meet Kev, an unemployed alcoholic pervert who spends his days and nights at the home with Derek, his best friend. At first you want to put a hand through the screen and slap Kev, but as the show goes on he wins you over and you all of the sudden want to hug him...and give him a shower.

The rest of the cast - Vicky, Tom, Dougie and all of the elderly residents - are just brilliant.

Maybe I am so touched by this show because just two months ago I lost my grandmother, who spent her last few years in a home much like this one. I picture her sitting in a room, much like the common room at Broadhill on the show, surrounded by other residents of the home, talking about her family and enjoying a cup of tea or serenading the residents on the piano. The episodes that featured family members coming to visit their eldery relatives touched my heart and brought me to tears because I only got to see my grandmother once in the last 5 years before she died (she was in Denver to my Boston - still not an excuse.) I wished we were closer so that I could have shared more quality time with her before she passed.

I know my grandmother would have absolutely loved this show too. She had that same dry British humor and loved all British television. I wish she was alive today to talk about the cast of characters - I know she would have loved Kev!

There are so many heartwarming moments in the series - the husband that visits his wife with alzheimer's every day, a young girl with a bad home life finding a love and support while working at Broadhill, Derek reuniting with his father he never wanted to see, Dougie cursing out a money grubbing daughter of a dead resident, Hannah and Tom trying for a baby, Derek learning to ride a bike and possibly my favorite, Kev building the sculpture of Oliver for Derek...tears! (Don't worry! I didn't spoil anything for you!) 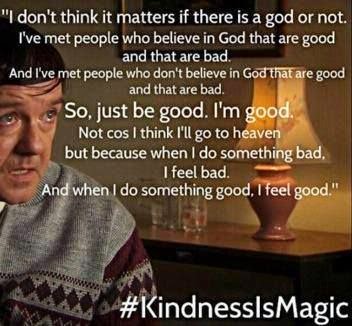 So go! Go watch it on netflix, now! Be prepared to laugh out loud and cry at every episode. And let me know what you think.