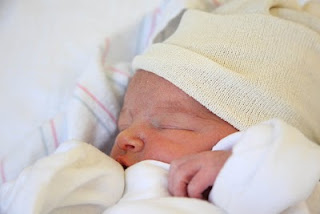 by Guest Blogger Mama A
New Baby Smell was something I had heard about - one of those unbearably pleasurable things that I hadn’t yet experienced, like new car smell (since I always had used cars). But this time I was going to get the real deal. My baby would be new!

Before Liam was born, swept up in the romance of the about-to-be, I would sometimes bury my nose in his tiny new clothes and blankets, which of course had been pre-washed in the special, super gentle, baby detergent. I inhaled the aromas of all the baby oils, lotions and soaps, all organic naturally. I imagined New Baby Smell to be a wonderful fusion of these soft sweet things combined with some special fragrance that my baby would emit from his pores and his sweet baby breath. I was in for a surprise.

My baby smelled like vomit and rotten milk. All the time. This was his signature scent. Certainly there were times when his smell would change. Like immediately after a bath. If I was quick, I could smell him and get a noseful of water and baby oil before he vomited again, but I was rarely quick enough and often got a hairful, or even once an earful, of vomit while trying this risky maneuver. The only thing that really covered the vomit and rotten milk smell was his gas.

My baby did not know how to shit, you see. He’d push and clench at the same time leading to no movement but much frustration, crying, and I imagine abdominal pain. Apparently this is normal. But no one tells you that you are born not knowing how to shit. What he did know, was how to fart. The boy could clear a room. I’d be trapped, nursing him, and suddenly be enveloped in a thick death cloud of smell that I swear lingered in my hair and on my clothes. (Oh, I forgot to mention that my signature scent during the early months was also rotten milk and vomit, and sometimes, baby fart.)

Ah, yes. Nursing. This is the time I imagined I’d breathe in New Baby Smell. I thought I’d stroke the soft downy hair of my tiny baby, nuzzle my nose into his warm, soft cheek, relish in these quiet moments while I nourished him from my own body. Maybe I’m ungainly, or maybe it’s because my son was born over 10 lbs, but I never got coordinated enough to nurse, stroke and nuzzle at the same time. Not that I’d want to. That soft downy hair I imagined was actually falling out in clumps. And the scalp underneath was covered in thick yellow scabs called cradle cap, which is also totally normal and common but you never hear about. And of course, the warm, soft cheek was deeply fragranced with vomit and rotten milk. Oh, and the quiet moments. Yeah right! My son thrashed about wildly while I tried to hold onto his massive head in one hand and steer my equally massive breast into his mouth with the other (it is easier to move your breasts than the baby’s head, by the way).

For us, nursing was not a simple thing I could quietly do while sitting around with others having polite conversation. First of all, the others usually had left the room anyway because of the aforementioned gas problem. But more importantly, to me, was that I had to be completely naked from the waist up. It was enough work for me to steer the giant head and giant breast without also having to discreetly move aside layers of clothes designed to be easy to discreetly move aside.

So, I spent the first several months of motherhood mostly alone, mostly naked, mostly in a noxious cloud of stink. New Baby Smell my ass.
Posted by Mama J