Smooth Sailing...well, Flying! (THE LONG OF IT) 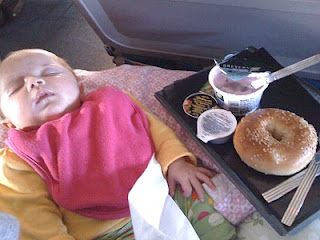 If you don't want to read my long winded story about traveling with baby, see the next post "THE SHORT OF IT".
There have been few times in my life where I have been sick-to-your-stomach-nervous: before my final dance performance in 2004, before I gave a toast at my best friends wedding, every time I gave an oral presentation in college, during a one-time pregnancy scare when I was first dating my now husband (and as you all know that was for naught! HA!)...and the days leading up to yesterday's flight to Florida with Marlo.
For weeks before our vacation (which I am now enjoying the crap out of by the way) I lost slept over the logistics of this trip. Since I was traveling down here by myself (hubby to come this weekend), I wanted it to be as smooth as possible. Should I strap her to me? Or put her in a stroller? Do I buy a snap n go or bring the big UPPA? Do I check it under the plane or gate check? Should I have my mom buy a pack n play? How much breast milk should I bring on the plane? How should I time my pumping so I won't be so uncomfortable on the plane? What if I have to pee during the flight? What if she is fussy and people get annoyed with me? What if there is a delay? My brain hurt.
So I reached out to my fellow Mamas and gathered a plethora of mixed advice. Many recommended putting her in a stroller and carseat, while others raved about the ease of traveling with a baby strapped to you. I opted for putting Marlo in the Moby, as I am a hands-free kind of gal. In order to make my decisions easier, my mom reached out to her fellow grandmas down here in Florida and was able to borrow a Graco carseat and base - one less thing for me to worry about. I struggled over whether to bring the UPPA (I know, my life is so hard), and finally decided that I would - we have this fancy thing, might as well get some use out of it! I then went online and researched travel cases and purchased the one that UPPA makes for the stroller system. Since we weren't bringing the seat there was plenty of extra room to shove things in the bag with the stroller (pump, Ergo, etc.). So now I had three bags packed: one for Marlo, one for myself and one with the stroller. Since my parents graciously donated miles for this trip, we were flying in style in first class, and were allowed three bags free of charge...thank God!
Now for carry ons: I obviously needed to bring everything I would in a diaper bag, but I wanted to bring twice as much for fear of us getting delayed and being stuck without the necessities. And I had to bring my camera, which is a big DSLR, therefore large and in charge. My good friend Mama M (at whose wedding I gave the aforementioned toast) gave me some great advice: put things in ziploc bags, and then put everything in one giant LL Bean tote bag. That way it is open at the top (no zippers or velcro to worry about) and things are contained inside just as you need them. It also makes it crazy easy when it comes to going through security. So, inside this giant LL Bean bag I had the following plastic bags:
So all of that stuff was put in my diaper bag, and along with my camera and a boppy I put all that in an LL Bean bag. This way I could just throw the one bag over my shoulder and be done with it! It made going through security super easy, which is what I was worried about most. Well, maybe second to her being Princess Fussypants on the plane!
We quickly settled into our digs in first class (did I mention we were flying first class? Because we flew first class...first class?) and as we were taxing I took her out of the Moby and put her in the Boppy on my lap. We did a bottle during take-off, as recommended by my pediatrician and many others, and then she seriously did not make a peep the entire 3 hour flight. I had to wake her up when we were making our approach into West Palm to give her a second bottle to help with her ears, during which she took a huge poop that the guy next to me heard and I tried to ignore. That's my girl!
The flight attendants were super nice and accommodating. I was unable to have a tray of breakfast, so they took the little tray they serve drinks on and gave me a smaller version of the breakfast that I could manage with peanut on my lap (see photo above). Also, we were given a certificate, signed by the pilot (oohhh! ahhh!) that said "My First Flight" on it, which I thought was fantastic.
It wasn't just the flight attendants that were nice though, it was everyone I came in contact with. The men at security all wanted to know about Marlo - how old is she? First flight? The people in front and back of me at Starbuck's struck up conversation about her, and offered to help me put splenda in my ice tea. Someone offered to help me with my bag when I was sitting down to wait to board. A man helped put my bag above my seat on the plane...I felt like I was pregnant again!
So basically the experience of traveling with my 9 week old by myself was easy as pie. I got myself all worked up for nothing, but isn't that what mothers do?
For my advice about traveling with baby, see THE SHORT OF IT post that follows!
Posted by Mama J