The Secret to Potty Training 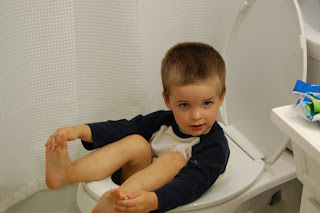 I promise, that's it. Just wait until your child's ready. How do you do this? Read on.

There are a number of "signs" that your child is close to being ready to go on the potty. You can google it and get a more comprehensive list that I could ever include here: telling you they need to go, asking to be changed, going in a particular spot, wanting to see you go the bathroom, using the potty randomly, etc. My child showed all these signs, but when I attempted to potty train him, it was a disaster. I asked him every 10 minutes if he had to go, but he still was managing about 99% accidents to 1% on the toilet ratio. Plus, I was saying potty about ten thousand times a day, a word I still think is stupid (and will use in this post about a hundred times). I was losing my mind. So I pleaded with my mom friends and one had the most simple, but genius idea: just ask him every morning if he wants to wear diapers or underwear. So every morning I asked, while also doing the following:
I always thought you could force a child to potty train...I thought if they're going to be ready in a few weeks, why can't they be ready now? Well, I do think there is a period after they turn two that they can be "forced" into potty training. Kind of like when you train a dog....they don't fully understand, but they get the pattern. And then the period from two and half to three is where potty training goes to die...it feels impossible, because they're all into playing mind games. At this point, you have to wait for them. The good thing is, when they're ready, it's easy. They know what to do and they just make a decision to do it. Within three weeks of my failed "forced potty bootcamp" my son asked to wear underwear. Once he said it, he was potty trained in a matter of days (Note: I highly recommend putting kids on the big toilet backwards - they seem to have better balance). Sure, we've had a few accidents here and there (let me tell you, it takes a long time running from one end of Costco to the bathroom), and I expect to have more, but diapers feel like a thing of the past.

However, please let me warn you...the potty is a place of great fascination for boys. My son is still wondering why he can't dip his behind into the toilet after he goes, to "clean off." See picture of above and invest in Clorox wipes. Lots of them.
Posted by Mama E