What a difference a month makes

In the last 4 weeks I have seen a tremendous change in M in everything from eating habits to the size of her feet (she took off a pair of size 4 shoes, rubbed her foot and actually said "ow" - I guess they are too small now!), and everything in between. Every day she is learning new things, and actually remembering them and using them in her day to day life. And every day I am amazed at how this little person that depended on me for every little thing in her life for the past 15 months is starting to show signs of independence. Now, it isn't like she is dressing herself or anything, but she is trying her hardest to!

Copycat
Everything I do, she wants to do too. If I put a headband in my hair, she wants to put a headband in her hair. If I blow my nose, she wants to blow her nose (which means holding a tissue up to her nose and blowing in it with her mouth). One of my favorite things she now does is when I am feeding her...if I have to blow on something to cool it down, as soon as I give it to her she blows on it before she puts it in her mouth. Mama did it, so I have to do it too.

I can figure it out 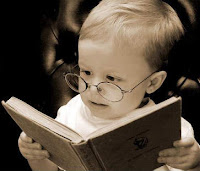 M is all about figuring things out for herself now: how her carseat buckles snap in place, how the clasp on her overalls work, how to zip and unzip her clothing. She especially loves to take off her diaper now while we are getting dressed. Her favorite though is putting on shoes. I will put them on her feet, and she will immediately take them off her feet and try to do it herself: this consists of her lifting her foot basically up to her face (while in a seated position) and knocking her shoe against her foot in frustration.

My little parrot
At 15 months, she is chattier than any baby I have been around. She will sit in her carseat and talk to herself in her own language. She has recently started trying to repeat everything my husband and I say too. Of course it isn't exactly (or sometimes even close to) what we said, but she tries her hardest. I will say "do you want some apples?" and she will say "wah ahbehs" or I will yell at the dog and say "No Ellie!" and she will say "no ehji!"

She has also started using some of her own words in every day life. "Nyeh nyeh" means "I want that" and as of late it means "i want it now or I will start whining" which is a recent development I am trying my best to deal with (I know, it is just the beginning of this!). "Djeh Djeh" means "I would like to go over there" and like nyeh nyeh if it has to be repeated more than 3 times, the whining begins!

Harvard here we come
I am sure many other toddlers out there do the same stuff M does, but in my head, my baby is the smartest in the universe of course (ha). I try to be the best teacher (as well as cook, housekeeper, caretaker, chauffer, etc.) I can be to M so lately I have started teaching her the ABCs, colors and numbers, with great success. She is finally at a point where all my constant "A is for apple"-ing is finally sinking in. And this is largely in part to some of the applications we have on my iPad (more on those to come in a separate post this week). It is seriously amazing to see her be able to pick up a yellow ball when I tell her to find the yellow ball. Now in all honesty, it could be total luck that she is doing that, but for me it makes her the smartest baby in the world of course!!

I think I have said this at every month birthday she has had, but this age is seriously my favorite so far. She finally likes me (and shows it with hugs and kisses) and we are becoming closer every day. Yes along with these fabulous new things she does comes the addition of new little attitude, but I love that she is starting show that glimpse of her personality to come, like Mama S talked about in her lovely post a few weeks ago.

Email ThisBlogThis!Share to TwitterShare to FacebookShare to Pinterest
Labels: Toddlers