Anyone that knows me knows I love to throw a party. More so I love to decorate for a party (or a holiday). I love to come up with a different color scheme, and make my own decorations. I try to always utilize things that I have around the house when decorating too. I jumped at the chance to host a baby shower for a dear friend of mine because it not only meant a fun and exciting project, but it meant that I had the chance to transform my house once again. 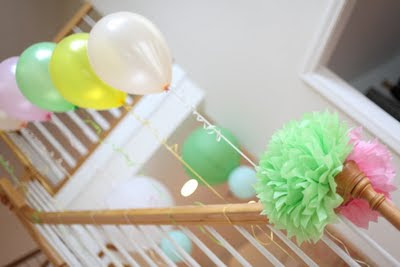 When I started planning, the baby's sex was unknown, so we went with a green and white animal theme. She had then found out that she was having a girl, so luckily I could throw some pink accents in there too. I had a color scheme of yellow/orange/pink/green (also the color scheme for M's nursery) so I was off and running!

I love a clean white space with pops of color, and I didn't want to spend a lot of money, so decided to do just lanterns, paper flowers, balloons and vases (that I had around the house) filled with some of M's stuffed animal toys. The paper lanterns I actually had from M's birthday/holiday bash we threw back in December, so that was one less thing I had to buy. 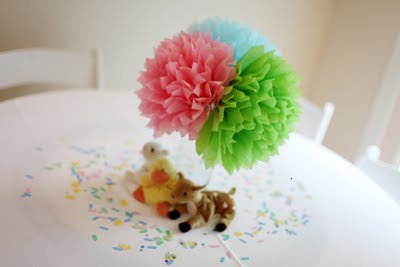 The paper flowers are actually my go-to decoration at all my fetes. All you need is tissue paper folded like an accordion fan, a pair of scissors to cut the end into a point or a rounded edge, and either wire or a pipe cleaner to secure it in the middle. You can use as many or as few sheets of tissue paper you would like, and it can be folded as tightly or loosely as you like. Just unfold like you were taught in elementary school art class, and you have yourself a paper flower! 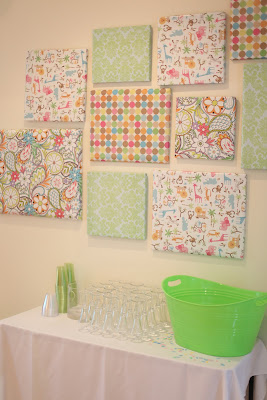 My second go-to decoration is to simply wrap large photos in wrapping paper. I have been doing this for years at Christmas time and it translated very well for the baby shower. I am obsessed with all textiles, including wrapping paper, so this is always a fun project for me. I chose 4 different papers to wrap the photos in, all in the same color scheme. I also took some old shoe boxes of M's and wrapped them up and placed them around the house as decoration as well. I didn't go all out, like I do at Christmas, with ribbons and other doo dads, as I wanted to keep it clean and simple. 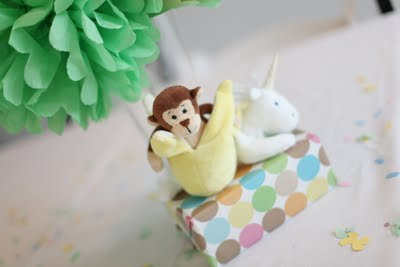 We were lucky enough to get the linens and chairs from the father-to-be's family who owns a party supply business, but they are easily rentable from anywhere. The food was catered by Vicky Lee's in Belmont, and I can't say enough good things about it! The desserts were made by the soon-to-be-father's mother and they were out of this world. For favors we ordered chocolate animals, which I don't have a photo of, but they were adorable. 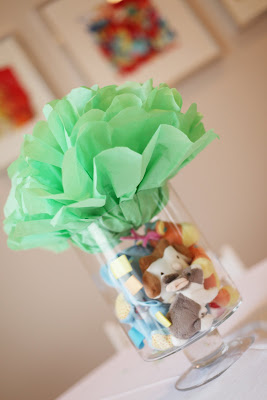 It is a week later and I am still in the process of taking down all the decorations. Instead of throwing out all those beautiful tissue flowers, I actually decided to make a valence for the playroom window... 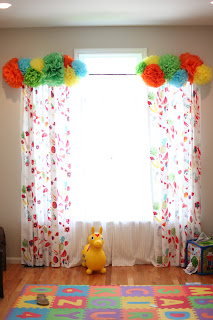 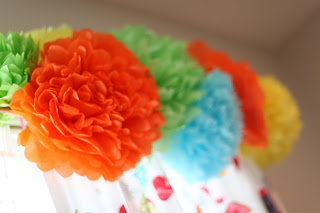 I had so much fun doing this, and can't wait to start planning M's 2nd birthday so I have something else to go all out for!
Posted by Mama J