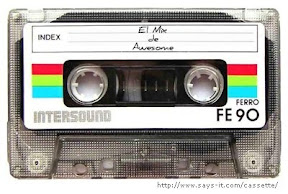 Making mixed tapes used to be one of my things to do. I would spend hours
crafting the perfect mix while laying on the floor of my bedroom in front of my dual cassette boom box. I would wait for the weekly countdown to come on the local pop station so that I could tape all the new hot songs onto a cassette and use them in my mix. I was a master at fading songs in and out. And then when my college roommate and I discovered (and I mean before most people did) one of the most ingenius creations of our time -
Napster - all bets were off. I now had the ability to find any song every created and make the most amazing mixed cds ever (I begged my father for a cd burner for my birthday and was the only one that I knew that had one.) I became the go-to girl for music at parties - and so became my obsession with making "mixes" for everything my friends and I did in life.

Roadtrip to NYC? Don't worry - I have 4 cds, timed perfectly so that we don't have to listen to anything twice on the trip there. And there are themes to each one of course!

Girls weekend at the Cape? Here are 3 cds - on each cd are songs that each have a fantastic story or memory to go along with them.

Party music mix you ask? I have pre-party, dance party, flip-cup, old school party, 80s party, Beirut, after party...you name it. Dancing with glow sticks? I have that covered too...

And then when the iPod came out - forget about it! I had a playlist for every mood (Chill Mix 1-4), every situation (Walking to Work Mix 1-3, Getting Ready 1-5), every part of my day (Workout Fast, Workout Slow, Good Times, etc.).

Needless to say I was very into music...so why am I telling you all this? Well, I haven't listened to anything other than toddler/baby music in a VERY long time. I have one playlist on my iPhone that consists of a smattering of different versions of classic kids songs, the theme songs to all of M's favorite television shows and some of my favorite Disney songs. This playlist is played every single time I am in the car...so much so that she can actually sing along to each song with me. I am so out of touch with today's music that for M's first birthday party (last December) I made a mix consisting of solely Motown oldies. These two mixes are pretty much all I have listened to in the year of 2011.

Yesterday I was able to have a few hours to myself, thanks to Dada J's "vacation" (is a lawyer ever really on vacation?), so I ran around in the car doing errands. It was the first time in a very long time that I was driving by myself, and able to listen to whatever music I wanted to. So what did I do? Put on my iPod, pressed shuffle, and further proved that I have not listened to music in a long time, nor should I ever put my iPod on shuffle when around my daughter...

"The Itsy bitsy spider..." Skip
"Yoooooo Gabba Gabba!" Skip
"Cruisin' down the street in my 6-4..." For those of you that don't know, this is the beginning to Easy E's Gimme That Nut...a terribly graphic, dirty rap song from the early 90s. I wasn't prepared for this...Skip
"I'll tell you what I want what I really really want!" I sang along for a minute and then Skip!
"Meeska! Mooska! Mickey Mouse!" Skip!


I finally settled in to some Mumford and Sons (one of the two albums I have downloaded this year - the other being Florence and the Machine- highly recommend both!) and enjoyed the ride, but then found myself singing along to another song...what song is this? Oh Crap! The Wheels on the Bus...Skip.

SO what is my point? I have a few:
- It is liberating to drive without a child in the car and be in control of the radio
- I need new music badly
- The music that M listen's to is actually tolerable, so I thought I would share her favorite disks with you (in no particular order):

1. Songs for Wiggleworms (upbeat, acoustic, catchy versions of old classics)
2. Sesame Street Platinum: All Time Favorites
3. Yo Gabba Gabba Music Is Awesome (there are two albums by this same name-both are great)
4. The Best of Laurie Berkner Band (a nice alternative to traditional kids songs)
5. Anything Disney!

That is all I have to say.