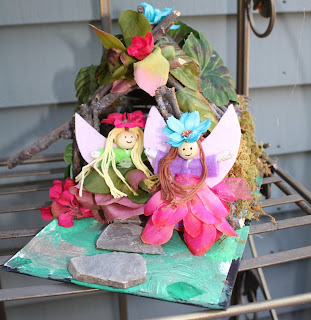 So the fairies that I made last week are pretty much an adult only project, at least as far as a 3 year old is concerned – although once the first one was made H began dictating when a new fairy should be made and gave specific instructions on dress and hair color. So I thought another way to keep H involved and take this project to the next level would be to make a house for the fairies.
*This project will not have the standard step by step instructions. At its most basic level, you just get a bunch of sticks and glue them together into a shelter like structure! But I will give a detailed account of how we made ours.

The first step was a huge hit with H – gathering supplies. We grabbed H’s Cape Cod tote bag, tucked a fairy into the front pocket, and headed over to the park. I showed her the type of sticks we needed and she was off. I think because of the hurricane-like weather at the end of the summer there was actually an ample supply of small sticks. She also grabbed a bunch of small flat stones and a few acorns – which she insisted on calling “pineapples”! 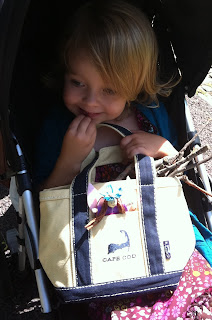 Once we got back home I did a quick search for a foundation for our house. I have a bag of randomness for the recycle center at the Children’s Museum and in it I found the perfect thing – the cover from a book binding. I set H up at the table with a bunch of green and brown paints and she got to work painting the lawn of our house foundation. While she worked on that, I started snapping sticks in half to make them all roughly the same size. 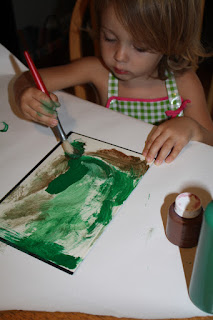 Once the foundation was painted a dried, I got to work on the house. This involved the hot glue gun and basically just stacking up sticks and gluing them together to make 3 walls. Having recently burned her finger on a popcorn popper, she was more than happy to stay away from the hot glue gun and focus on watching, giving the occasional direction and sorting through the silk flowers and leaves for the roof… ok she may have wandered off and watched Backyardigans for a bit too!
For the roof I did a few sticks that joined at the top tee-pee style and then glued flowers and leaves to the roof and stuffed some moss between the cracks between sticks. H picked out 3 flat stones and we glued them to the base to make a walkway up to the house. Then we took it outside and introduced the fairies to their new home! 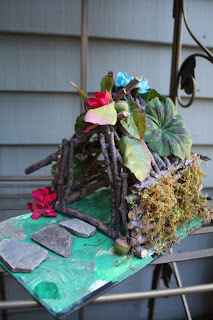 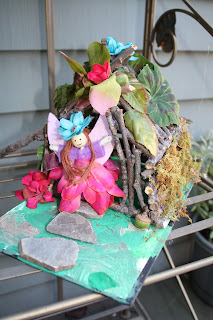 NOTE:
If you have a dog, you may want to leave the fairy house some place high when you’re out. We learned this the hard way. We’re not sure if our dog Ella loves sticks or hates magic, but either way she tore into that house and completely destroyed it! Fortunately, no fairy was hurt in the demolition and we were able to rebuild! 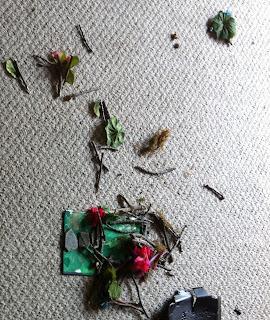