An email address for a 2 year old? 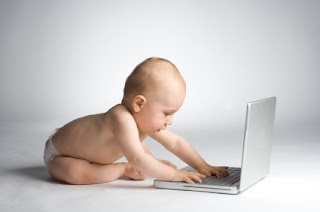 A friend of mine had a baby late last year, and when she announced his birth she included an email address that was the new babies name at gmail.com. I thought she was insane. What the heck does a newborn need with an email address?

And then I saw a commercial where a young father sends emails to his baby daughter, at her own email address, with photos and notes that she is to read when she is older. I shed a tear and then realized that my friend (and this commercial) is a genius.

Every year on her birthday my husband and I write M a letter, for her to read eventually at some point much later in her life. I love the idea of getting all my current thoughts and feelings down for her to one day read. I hope that it will be as satisfying and emotional for her to read as it is for us to write.

Having this email address is kind of in the same vein as the letter writing. As the man does on the commercial, I am now able to send her little notes, to her own special place...almost like I am sending notes to her in the future! Of course I could just write these things down and give them to her, but that is so 2000s. HA! And I can even have my parents write to her at this address. How cool would that be? I would have loved to have something like this from my grandparents when they were younger (or alive).

And I am sure gmail addresses will be in hot demand in 5-6 years when she would actually start using it (or at this rate maybe 3 years) so it doesn't hurt to lock up your kids name @gmail.com while you can.

Hopefully gmail won't be the next @aol.com and become terribly old school when she starts email. Better safe than sorry!
Posted by Mama J

Email ThisBlogThis!Share to TwitterShare to FacebookShare to Pinterest
Labels: Technology