Parenthood is the best show on TV...hands down!

SPOILER ALERT! IN THE FOLLOWING POST I WILL BE DISCUSSING THE 9/21 EPISODE OF PARENTHOOD. IF YOU DO NOT WANT TO BE SPOILED, DO NOT READ FURTHER! 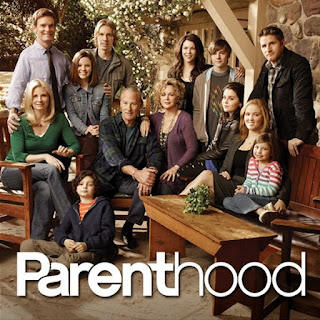 Every week I look forward to Wednesday afternoon. I wait until M is down for her nap around 1, grab my box of tissues, and settle into the couch to watch last night's episode of Parenthood. Because I am an old lady I am unable to stay up on Tuesday nights to watch it live, so I must watch it on DVR the next day (thank inventors for DVR!), plus who watches live TV anymore? Anyhoo...

Every week I am taken on an emotional roller coaster by the Braverman clan, and this week was like no other. Holy crap, can we talk about all the madness!! Let's start with what I think was the most gut wrenching story line I have ever seen on tv - Julia adopting Zoe's baby.

I knew from the first moment they introduced this story line that Zoe would change her mind and Julia and Joel (her amazingly awesome hubby) wouldn't get the baby. Of course I was rooting for it all to work out in the end...and never did I think that Zoe would wait until the very last minute to change her mind. When Julia saw Zoe in the nursery holding the baby I seriously lost my breath, and then started sobbing uncontrollably. I don't blame my reaction on the pregnancy hormones, I blame amazing acting, writing and direction. Those couple seconds where the two of them are just looking at each other, and Zoe looks away and looks back, but Julia never takes here eyes off of Zoe - you could feel Julia's heart being crushed. And then when Joel and Sidney come up in the elevator - forget it. That look that he gives her. Oh my god I wanted to jump through the screen and hug her. I think I used 5 tissues for those 5 minutes.

Now if I was Julia this probably would have gone down a lot differently - there would have been some screaming and some hair pulling for sure (well, maybe just some screaming and some security involvement.) I know they had to do it for the story line, but who would do an open adoption in the first place! If ever I am to adopt a child it will be closed for sure. I don't want to meet the parents, and I don't want the birth parents to have any involvement in my child's life (until at some point the child would want to meet them). Knowing the birth mother from the beginning, before she has the child, is just not something that I would want - especially having such a big part in their lives. They were way too good to Zoe throughout the whole thing.

And didn't they have a contract that Zoe and her boyfriend had signed? Isn't the baby legally theirs?

Let's move onto my adorable Crosby - love that Jasmine finally admitted to herself that he is the one! Two tissues for that scene alone.

Amber coming into her mother's bedroom at the end and saying "I just wanted to see my mom..." and then crawling under the covers with her. Two tissues. I just pictured M coming to me when she is grown up, and needing some advice and having no one else to turn to but me...sniff sniff.

I won't even bother talking about Adam - I wanted to throw my tissue box at the TV during his scene this week where he shakes the guys hand and agrees to the deal to sell the Luncheonette. ARGH! I know he needs the money, and he can't legally do it without Crosby, but he shouldn't have been at the meeting in the first place.

I know I am talking about these people like they are real, but they feel so real to me! The writing is so amazing that I feel like I am watching my friends on the television, and the acting is just beyond. How is this show not nominated for awards? And I read a rumor that they were thinking about canceling it! They better not still be thinking that, or Mama J is going to be writing some letters and making some phone calls.

If you are a parent, and you are not watching this show, you are crazytown! Go on Hulu.com and watch the back episodes, and get caught up. You will be sorry that you haven't been watching it these last two years!!
Posted by Mama J