H has three girl cousins, two that are almost the same age as her, that she loves very much. One lives in Brooklyn and the other two live in upstate New York. As they've gotten older, they've gotten closer and now have real affectionate relationships with each other. Also as she's gotten older, she's more aware that:

1. she loves them
2. she wants them around and
3. for some reason, they are not always around.

When getting ready to leave her NYC cousin this past weekend, H tearfully said to me "But I will miss her!"
"I know," I said, "but we'll see her again in a few weeks."
"But...' she thought hard, "then we'll see her again and then we'll leave again and then I will miss her again."
I could be wrong, but I thought this was a pretty impressive thought train for a 3 year old. This coming from someone who refers to everything in the past (even as long as a year ago) as "last night" and anything happening in the future as "tomorrow."


Trying to have the girls talk on the phone is painful, and Skyping seems to usually involve a lot of "watch me do this!", so when I came across this blog series called 13 ounces or less, I thought it seemed like a great way to keep H engaged with her cousins in those weeks in between visits. Besides, who doesn't love getting things in the mail!?

The basic idea is that you can ship pretty much anything via the USPS and as long as it's 13 ounces or less you can do it first class for a dollar or two. You should definitely check out the blog - she's sent some pretty funny things like flip flops (just flip flops...with stamps on them), bouncy balls, and even a shovel and pail.

For our first package I had an empty Altoids tin that was just screaming to be used. I was debating what to put in it when we came across some mini chicks at the craft store (this was right around Easter). We made a little nest of paper grass and tucked several of the chicks in. I secured the open side of the tin with bright green duct tape cut in the shape of a heart. I stuck a label on the top and it was off to the post office to mail it to H's upstate NY cousins. Honestly, the postal worker didn't even bat an eye! 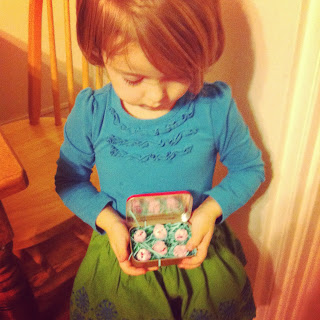 For her Brooklyn cousin we got a bunch of mini plastic eggs and tucked a mini chick inside each one. For my sister, who has a peep obsession, we dipped peeps in melted chocolate and then sprinkled sprinkles all over them. Since this package had more components we wound up putting it in a regular box, which I guess would make it...just a care package. But still fun!

On one of my regular turns through the dollar section at Target I had come across 2 things that I new would be perfect for 13oz or less packages. One was a pink plastic Paul Frank pencil container with a screw off top. The other was a small tin with the image of a little girl (who kind of looks like H) on the cover. We grabbed some crayons and pencils to put in them, but I wanted to include some pages to color. I used an iPad app to turn some pictures of the girls into black and white sketches. We rolled up the papers, pencils and crayons and popped them into the pencil container for the upstate girls, and folded up some pictures and got an entire box of crayons into the tin for the Brooklyn cousin. 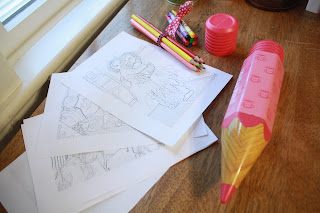 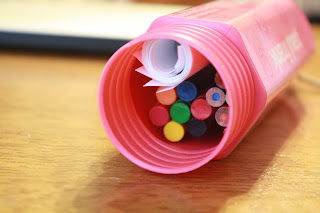 I used the green duct tape again to secure them, and it was off to the post office again. Now they think H and I and our funny little packages are cute and try to find the best ways to get the postage on without covering up any of the adorable. 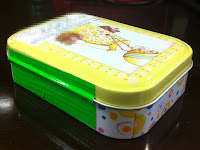 If you come up with any fun packages to send to anyone (I think even grandparents would enjoy some fun mail!), tell us about it in the comments!

Email ThisBlogThis!Share to TwitterShare to FacebookShare to Pinterest
Labels: get crafty