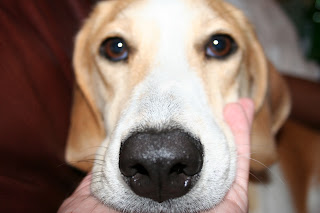 Shortly after my husband and I were married in 2005 we started kicking around the idea of getting a dog. We had just moved to a very dog friendly neighborhood, where every other condo had a dog. We knew we were going to start trying to have kids in the next couple years, so why not get a dog and try this parenting thing out on a smaller scale.

Neither of us grew up with dogs, or were really around dogs a lot during our childhood. I had friends who had dogs, and loved being around them, but never really thought about having one myself. We did know that if we were to get a dog we would rescue, or adopt, one, as opposed to paying for some fancy breed of over populated dog. So we began to look on petfinder.com to see if there was any pup that caught our eye.

Within a few weeks we came across what we thought was the cutest puppy we had ever seen...she was a "beagle mix" from Virginia, and said to be about 35 pounds fully grown. And to our excitement she would be at a local "puppy open house" in a few days, and would be up for adoption.

The day of the open house we arrived an hour early, and were first in line to pick out our puppy. Out came the puppy we saw on the website - she was brown and black with white marks, and was jumping up and down like a crazy little thing. Then, they brought out her sister - she was white and tan, and sat very calmly in the corner. They called us forward and literally just said "OK, pick out your dog." Everyone in line behind us wanted one of these two puppies - I could hear the moans from the crowd as we went towards the two beagle mix dogs because they knew they were going to miss out on the dog they wanted. My husband and I looked at each other, and we knew instantaneously that we were changing our minds and going for the quiet sister of our first choice. She was just too cute to pass up. So he leaned over and picked her up, we signed some paperwork, paid our little fee, and we were dog owners.

As we were driving home, and Ellie, our new puppy, pooped all over the crate we had in the back seat because she was petrified,  and I immediately regretted our decision. WTF did we just do? Did we really think this through? Why did we get this dog? Why did we make this decision so hastily? And for about a week I was fully committed to returning her to the dog shelter. She was sleeping in a crate in our room and would whine the entire night. Because she couldn't walk up and down stairs, and was only 9 weeks old, I had to get up with her multiple times during the night, to carry her up the stairs to the main floor, out the back deck, down the stairs to the patio to "go potty" - what? Foreshadowing for parenthood maybe? Well, without the bringing your kid outside to go potty of course...


Then she started chewing on everything - every piece of furniture we got for our wedding was ruined within a few weeks. Then we got a trainer, and things started to get better...and hell, when she curled up in a ball between us on the couch and looked at us with her giant brown eyes, our hearts melted. We were in love, no matter how much of a terror she was...and she became the center of our lives. We loved her as if she was our first born - constantly taking photos of her, bringing her everywhere with us,   buying her toys all the time, dressing her up (ok I only did this twice on Halloween and she hated it, but I loved it!) If I was on Facebook back then she would have been my profile photo and I probably would have been one of those dog owners who posted photos of every funny position she slept in. Hell, Ellie was the center of our Christmas card until we had M.

Fast forward to today - Ellie is now 6 years old, and 60 pounds, and living with us in a much bigger house in the burbs.  She survived the addition of M without a hitch - ok maybe there were a few times she got upset because we were now diverting all the attention she used to get onto this new little human, but overall she handled it much better than expected. Ellie was a perfect dog when we moved 2 years ago, and has settled into middle aged life nicely. Well, that was until about 4 months ago...

Sure she still sleeps most of the day, but she has been totally acting out at home. She is barking much more (and damn is it loud) at everyone and everything. I have caught her attempting to chew on furniture multiple times. She went almost 2 years with never getting up on the couch (maybe once before) but all of the sudden she is testing us and jumping on the couch, and we think she has even slept there a few nights, as evidence from the massive amount of dog hair on the middle cushion. A person can't walk by our house without her going batshit and barking like she wants to kill them.

She has started to chew up some of M's toys during the night, or when we are gone. And for the first time since she was just a few months old she actually had an accident in the house during the night! She got into something funky on a walk, and it obviously made her sick, but never has she pooped in the house before, until this past Saturday.

And I think I know why this is all happening. I think she knows that there is soon to be another addition to the family, and she is acting out in protest. She knew when I was pregnant with M, because she became very lovey with me. She would put her head in my lap and would be very protective of me. Then, when M came home she instantly became a protective mother - never lashing out at anyone, but always near M when she was little, or would stay close to us at the dog park, and didn't like when other dogs came close to the stroller.
Now that she sees what these sweet little babies turn into - a toddler that gets to eat off our plates, runs around the house, gets to go out with us everywhere we go, and has totally taken over her place as "first born"- I think she is pissed at us for bringing another one into the house. Call me crazy, but I know she knows. And all of this regressive "bad dog" behavior is her way of protesting the future arrival of baby girl number.

Of course she makes our lives a little crazier, and more stressful, but we would never think for a second of giving her away. She is as I say our "fur-st" born, or as I used to call her my dog-hter. She is a part of our family and will be until the day she goes to the farm to have "more room to run around." That is not to say there aren't days that I just want to leave the backdoor open and have her run off, but of course I would like her to find her way back home...in a few days. But, that is what doggie daycare is for! Which, as of late I have been taking advantage of a little more than I probably should be...anyways!

With all this said, are there any other dog owners that have had this same experience? Did your dogs behave differently when kids came into the house? What about a second child?