For Your Viewing Pleasure

So this month marks a year from when we bought our house in the suburbs.* Back when we moved and I went radio silent, I mentioned that we were doing some work to update the house from its totally awesome 1980's look.  I'm posting a few before-and-after photos now. 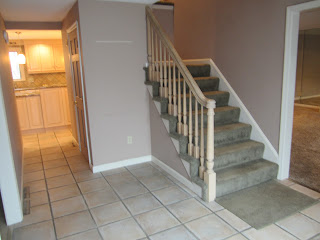 This is what the hallway looked like when you walked in. Notice the hideous pinkish-gray tile that goes through to the kitchen, as well as the nasty pinkish-gray wall color.  (The ickiness of the ancient carpet on the stairs goes without saying). 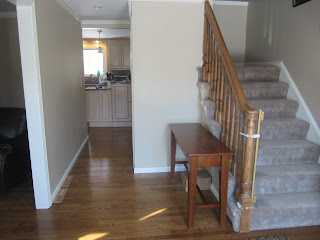 Since the living room (to the left) had oak floors, we added oak floors throughout the first floor, into the kitchen and the family room (to the right). We also added new wall to wall carpet (easier with three kids), repainted, and restained the banister.  (And added the chic baby gate!) We also added crown molding and covered over the scary popcorn ceiling. I wish I could show you our blingy new light fixture but it would not fit in the photo. I'm going to put something there besides that table, but not sure what yet. 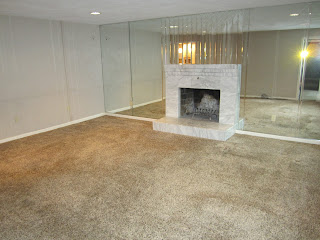 Is it a yoga studio? No! It is what our family room (to the right off the hallway) once looked like. We were so blinded by the mirror that we didn't notice the sheer hideous-ness of the gray-and-white marble tile fireplace until we took the mirror down.  The dark gray shag carpet doesn't come through in the photo, but you can see the dull color on the walls. 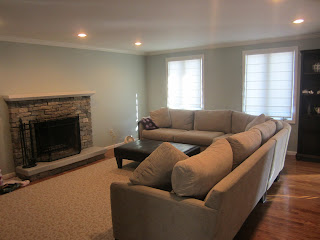 Let there be light! We added canister lights, hardwood floors, and crown molding, covered over the popcorn ceiling, and painted the walls a soothing shade of sage.  (To the left of the photo, out of range, is an absolutely gi-normous TV purchased by the Grump). But the piece de resistance is the fireplace: 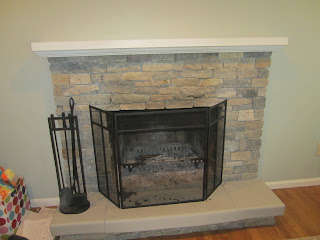 Our contractor, who was in many ways a crazy person, did a fantastic job on this fireplace. Using local stones in shades of gray, gold and green, he made it look much better than I could have imagined.  The mantlepiece has matching crown molding to that on the walls.  (The local bluestone on the bottom had really sharp edges, so we covered it up to protect the kiddos for now). I'm looking for a classy mirror to place over the fireplace in homage to the giant mirrored wall. 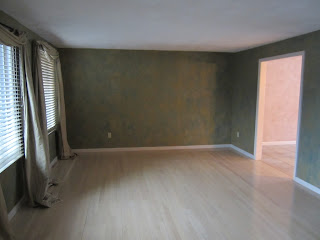 ﻿
Yes, that is a swirly pattern of green, gold, and blue that was thickly applied to the walls. Yes, those beautiful oak floors are covered by whitewash ("pickled" is the term).  And yes, those ghastly curtains were kindly left for us.  This room used to have oversize furniture and sculpture in an African theme. 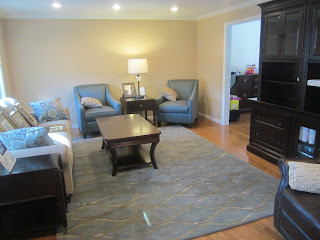 Popcorn ceilings, crown molding, overhead lights, restained floors, new paint job (on new drywall, because the previous paint job was too textured to repaint)...and a complete set of furniture from Basset (boy, do they love my husband, who did the layout and chose the furniture for this room) later, we now have a comfy place to sit and chat without a giant TV screen in the way. The two chairs at the back of the photo have leopard print pillows, which is my personal homage to the previous owners' decorating choices. I'm still trying to figure out artwork - we have some framed posters on the wall, which you can't see in the photo. 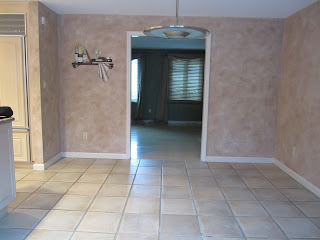 The kitchen had undergone a renovation about 10-15 years ago, so to the left of the photo, we had new appliances, granite countertops and decent ceilings with canister lights. But what is up with the flying saucer? The paint job (including that bizarre stencil) as well as the tile, had to go. 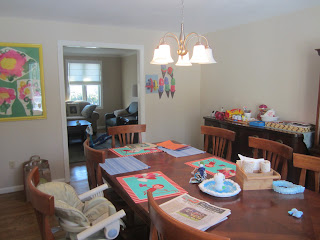 The new fixture is from Home Depot, and casts great light. I didn't show the rest of the kitchen because someday I hope to modify it, including the dated-looking cabinetry. But for now, it's in good shape, especially with the hardwood floors, and I don't really have a good reason to change it. I'm also getting some artwork for the wall over the buffet.

I'll save the rest of my photos for another post. Meanwhile, if you have any suggestions or comments, I'm all ears!

*Not that you asked, but with reference to the previous Cantabrigia post...Both me and the Grump would have loved to stay in the city, but our landlord wanted his condo back. My parents both grew up in the city (Mom in Philly, Dad in the Bronx), but I grew up in the suburbs, so I thought it would be cool to go back to the family tradition.  Ideally we would have postponed the decision - we would have gone through the Boston public school lottery to see where the Duchess would attend school, and then determine whether we would buy somewhere in the city to be close to that school, or if it was a bad one, move to the suburbs.  But the Duchess misses the September 1 birthday deadline, so she would not even have been eligible to enter the lottery for pre-kindergarten spots until 2013, and we wouldn't have found out to which school she had been assigned until this coming April, a full year after our landlord wanted us out.  Private school with three tuitions would be out of the question, and although there was a reputable parochial school on our radar, the thought of moving to that part of town and trying to find something with enough space was daunting. So, we took off.
Posted by julesrules