We are lovers, not fighters, in this house

M came up to me the other day, with her hands in a chokehold on her own neck, and said "mom can you do this to me?" I looked at her, horrified, and said "absolutely not! What are you doing? Where did you learn that?" and she said, "it's what Mr. Incredible does to Mirage in the Incredibles movie."

Of course it is. She doesn't realize that what Mr. Incredible was trying to do was inflict pain upon Mirage in a fit of rage, she just thinks it is something that one character in a movie was doing to another. 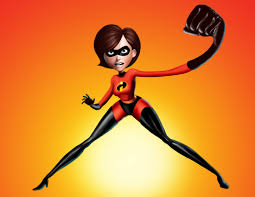 The same day she approached me saying, "mom, can you punch me in the face the way Elastigirl does to that bad guy? Like this?" as she mimicked being punched in the face and falling over.

Maybe this is a sign we have been watching the Incredibles too much lately (but damn it is the best Pixar movie! Besides Brave, and the Toy Story series of course...they are all so good!) or maybe I have to pay more attention to what my almost 4 year old is watching.

Both times that she asked me to reenact a fight scene I explained to her that what she saw in the movie was not how we act in real life. That in this house, we love each other, we don't fight with each other, and we never, ever, ever hit each other. Which is totally the truth - we are a very kissy/huggy family.

I will happily indulge M once a day and "marry" her. She puts on a veil (a piece of tulle from my
studio) under a tiara, and holds a silk flower in her hand while she lays one on me for about 10 seconds and then says "we're married!" I have M kiss her sister as often as I possibly can (which ends up being about twice a day because most times she just says "no thanks!" and runs in the opposite directly.)

It is important to me that my kids grow up in a household full of love and affection. My husband and I kiss each other in front of the kids (or "get married" as M calls it). I want my kids to know that their parents are happy, and truly love each other and aren't afraid to show it, much like my parents did when I was growing up (and they are about to celebrate their 40th wedding anniversary). We often have family hugs and everyone kisses each other before bed. I don't leave the girls' rooms at nap or bed time with telling them I love them, and having them tell me they love me (well, with Val it is just me saying it of course).

I have so ingrained this lovey-dovey-ness into M that we will be out and about and she will just give me a big hug and kiss and say "I love you mom! Give me a kiss!" What mom doesn't want to hear that from her child?

I know it won't always be like this. I know that somewhere, not to far, down the line the girls will fight with each other, probably physically, just like my brother and I did when we were young. I won't like it, but of course will be ok with it because it is par for the course - they just better kiss and make-up after their battles because in this house we are lovers, not fighters, as MJ so elegantly put it.

Unless we are battling on the dance floor during our dance parties...that is another story!