Fired up: a tale of one pregnant woman's journey on the T during rush hour 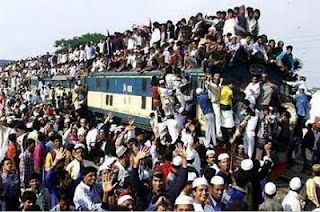 (a photo from my train ride in Boston this morning...hahah!)
Since I work from home, I rarely take public transportation, and if I do so, it is the bus. Well, this morning I had to drop off my car at the dealership in Brookline, so I was forced to take the dreaded Green Line (which I must say I used to take every day for 3 years to and from work) into the city at 7:30 AM.
After waiting at the Brookline Hills stop for 20 minutes, an overly packed train came to a halt in front of me and approximately 40 commuters. Because of the overcrowdedness of the train, all of the doors were open to facilitate boarding. I move from the front door down towards a back one to see if there is any room for me, and my giant belly clad in a yellow rain coat to board. Did I mention that it was pouring out?
I manage to squeeze my way onto the train, and I am forced to stand in the doorway, reaching out for the nearest poll to steady myself. At the next stop, two seats open up right next to where I am standing, as school children disembark the car. I figure since I am noticeably pregnant (by this time I am rubbing my belly and arching my back) that I will be able to cop a squat in one of the vacant chairs. Oh no! Two middle aged business man in executive trench coats rush by me to take the seats!! They open up their papers simultaneously and ignore me, as I am now basically standing over them with my belly in their faces.
They weren't the only culprits. All around me were able bodied men and women who kept their heads down and ignored the fragile pregnant woman (ha ha) that was being bounced around between the other people forced to stand on this overly crowded train. And because I was forced to stand in the doorway area, I had to then get off and on at every stop to let the passengers disembark at their respective stops! So now the pregnant lady not only doesn't have a seat, but has to walk up and down the stairs, to wait outside in the rain while people get off. I am getting fired up just thinking about it again!
At about the third stop into the city, a lovely dashing older gentleman was standing with me in the doorway and said rather loudly "So I guess there aren't any seats for this pregnant woman here, huh?" I blushed and giggled at his bold statement, and commented about how chivalry was dead while nodding toward the trench-coat mafia sitting right next to me. We got into a conversation about when his wife was pregnant he would ask people to give up their seats, and I told him I was getting off shortly (in 4 more stops), and he told me not even to bother with the older gentlemen if looking for a seat - that it will most likely be another woman that gives up her seat for me in the future.
Isn't that the truth though?? If I was on this train and saw a pregnant woman, or someone elderly - man or woman - I would get up in one second flat. These commuters will be sitting all day at their desks...will it kill them to give up their seats to someone who is 8.5 months pregnant? Apparently it will...
Now I must admit that I wasn't miserable standing on the train, it was just the principle of the whole thing that got to me - hence this post. It turned into more of an experiment for me - how far out can I stick my belly before someone offers me a seat? What if I rub my back? Maybe some neck rolls? What about a nonchalant sigh? Some deep breaths? Maybe they will think I am going into labor...Nope, still standing. Jerks.
Posted by Mama J