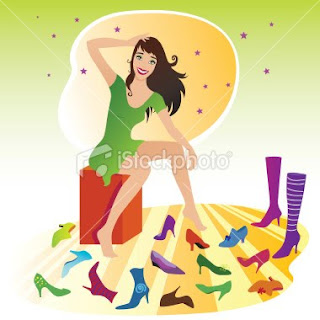 Let me introduce myself. My name is Becky and I am a Shoeaholic. One look at the storage bins under my bed and I'm certain you will agree. My mother diagnosed my addiction at age twelve, when I graduated from Keds and entered the world of booties (which are actually back in style) and Mary Janes. In some circles, I am known as The Woman Who Wears Inappropriate Shoes to Work. Like many women, I love a good pair of shoes and can always justify a new pair. You may be wondering, "What does this ridiculous post have to do with babies?" The connection is imminent, I promise.

While pregnant, I watched myself outgrow every piece of clothing in my wardrobe, but my feet remained unchanged. This enabled me to wear my beloved shoes throughout pregnancy, even my three inch, knee-high boots (which also earned me the title of The Woman Who Wears Ridiculous, Unsafe Shoes While Pregnant). As my body became foreign, my shoes allowed me to cling to a little bit of style, a little bit of my pre-baby self. No matter how I felt or looked from the ankle up, my feet looked amazing!
Toward the end of pregnancy, I sadly stored my wedges, heels, and boots under the bed, in favor of flats, sneakers, and flip-flops. Since Baby's arrival, the ridiculous, unsafe shoes only come out of hiding for the occasional date night. Even worse, I have not purchased a new pair of shoes since before Baby. Eight months without a new pair of shoes is far too long for a Shoeaholic. On Tuesday, I relapsed.
On a quest for a new pair of sandals, I took Baby shoe shopping. Our first stop was Super Fashiony Shoes for Trendy, Young Things, where I shopped frequently in my pre-Baby days. After awkwardly pulling Baby's stroller through the doorway with one hand, I looked around at the stark white walls, the minimalist decor, the blinding florescent lights, and the very young women at the cash register. Feeling slightly out of place, I scanned the racks for that just right pair of sandals. Nothing seemed to work. The heels were too high. The colors were too bright. There were too many straps. I don't like zippers on sandals. What was my problem? I used to love this store. As I pretended to scrutinize a pair of gladiator sandals, I looked around again. Nobody in the store was over thirty years old (except for me). Nobody was wearing sneakers (except for me). And absolutely nobody had a baby (again, except for me). Now that I am a mother, does that mean I do not belong in the trendy shoe store? I certainly felt that way. As a twenty-two year old saleswoman approached us, I mumbled something about nap time and backpedaled toward the door.
There had to be a different place to buy sandals, I thought, as I pushed Baby around the shopping center. Around the corner I found a different shoe store, Practical, Sensible Loafers for Women of a Certain Age. The ambiance in this store was markedly different; warm paint and fake stones on the walls, an abundance of plants, and Enya wafting through the speakers. Amongst the Crocs and clogs, I found a pair of sandals I actually liked! They seemed comfortable, yet cute. Sensible, yet stylish. I was just about to try them on when I noticed the other patrons in the store. Most women were at least ten years older than my mother. Most had shortly cropped, white hair. And most wore cable knit sweaters with turtlenecks and corduroys, even on this seventy degree day. Oh My God! I was in an Old Lady Store! Again, I ran away from the saleswoman, this time mumbling something about missing rush hour traffic.
I stood defeated on the sidewalk outside. Where did this Shoeaholic belong? Clearly too old for one store, yet many decades too young for another left me at a crossroads. Does becoming a mother mean having to forgo fashion in favor of practicality? Does caring for a baby mean a woman must stop caring about her style? Do certain stores have an unwritten rule that reads, "No Shoes, No Shirts, No Babies, No Service"? Do I have more in common with the stately women in turtlenecks than the carefree women in mini shorts?
Empty handed, discouraged, and confused, Baby and I went home. Until I figure out where I belong, I am shopping online. And after I buy that sought after pair of sandals, this Shoeaholic is entering rehab.
Posted by Mama B