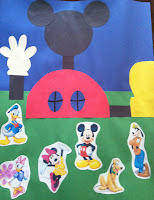 Up to this point, my daughter’s TV exposure has pretty much been limited to Sesame Street and Movie Night Mondays, when we make popcorn, turn off all the lights, and watch Disney classics or a Pixar movie.

But over the holidays I introduced her to some classic Disney holiday cartoons and she was absolutely hooked. Her favorite character is Donald Duck, which warms my heart because he was always MY favorite. He’s clearly the most complex of the original Disney characters – he’s cranky and has a quick temper but he is also quick to apologize and has a good heart in the end…kind of like me…and my daughter.

So I was actually pretty happy that she embraced these cartoons, especially since we did a fair amount of traveling over the holidays and they were a nice bit of entertainment for her.

But now the holidays are over, and, in an effort to wean her off the Christmas video, I did a quick onDemand search and found a show called Mickey Mouse Clubhouse – a show featuring the standard Disney characters: Mickey and Minney, Donald and Daisy, Goofy and Pluto. It is in many ways the exact opposite of the classic Disney cartoons. Rather than the old school hand animation, Mickey Mouse Clubhouse (MMCH) uses the most basic of computer animation. Instead of a classic old school Disney cartoon storyline (with the occasional smoking scene or drinking reference), MMCH is borderline educational - in that it is interactive. The characters engage with the audience as if they are helping to drive the story forward. And maybe that is part of the appeal. Because I have no doubt, though the animation may be basic, that Disney has invested in and perfected the art of capturing a young audience. And damn, my daughter is hooked.

Hooked like a drug addict. When she wakes up it’s the first thing she says: “Mickey show?” When she gets home from daycare she refuses to take off her coat and hat, clutches her Donald duck stuffed animal to her chest, demands Mickey immediately, and will refuse all food and drink until I tell her that she cannot watch it until she eats.

If the 24-minute episode ends while I happen to be in the kitchen or bathroom, she will begin rocking back and forth chanting “Mickey”, and then will immediately jump to full-on crying mode, breaking with all previous tantrum protocol that usually involves a quick but stepped process to full-on crying.

She clearly relates to this show. In addition to answering the questions that any character may ask of her, she seems to feel as though this show is portraying her life. Every minute or so, when something happens on screen, she will turn to me and say, “that’s just like me, mommy!” And I have to put a smile on my face and quickly come up with some sort of connection to her life, however tenuous, even though in my head I’m saying “oh really, Hannah? You own an elephant too?”

I don’t have very strong feelings or opinions on TV restrictions. My daughter is very active and bright, and my husband and I were both raised with fairly unrestricted access to television. We both went to college and have good jobs and, in my opinion, are both pretty intelligent and creative people. However, I don’t want my 2 and a half-year-old sitting in front of a TV all evening.

So, as is standard with a toddler, we have a new phase and a new routine to work our way through it. Two episodes of Mickey after daycare, followed by the lengthy and tearful process of tearing her away from Mickey, doing things like bath time and puzzles and reading books – all of which she is fully engaged in once there. But to get there, we need to give endless reassurances of “you can watch Mickey tomorrow…you’ll get your next fix tomorrow…”
Posted by Mama S